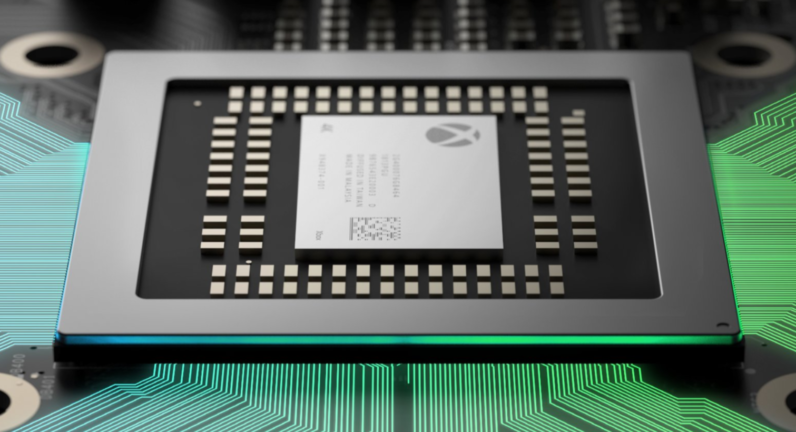 Just as promised, Eurogamer has revealed the specs for Microsoft’s upcoming ‘Project Scorpio’ successor to the Xbox One this morning. The specs are straight from Microsoft, so they are official, and presumably final.

Needless to say, the console is a beast.

Many of the specs we’ve seen thrown around before were confirmed. The console achieved the promised six teraflops of performance using a custom eight-core processor clocked at 2.3 GHz – about 30 percent faster than the one on the Xbox One, and better at handling multitasking.

It’s not a crazy leap in proecessor technology, but that’s in part because Microsoft is demanding Project Scorpio be compatible with all current Xbox One games and that all games designed for Project Scorpio era run on the original Xbox One as well. Project Scorpio isn’t as much a new console generation as an incredibly powerful Xbox One.

But it’s the GPU that’s the real improvement – it’s about 4.6 times more powerful than the Xbox Ones. The 12 GB of ultra-fast GDDR5 RAM (8GB reserved for games), meanwhile, will help a great deal on loading those pesky 4K textures.

And yes, all those specs make it a fair bit more powerful than the PS4 Pro. While that console isn’t quite able to play every PS4 game at 4K, Project Scorpio can theoretically handle pretty much any current Xbox One title at 4K with room to spare. Eurogamer had this to say about a tech demo based on Forza Motosport 6:

At the same graphics quality settings as Xbox One, the demo ran at a full 4K resolution, at a perfect 60 frames per second. For Xbox One to do this at a standard HD resolution of 1080p uses about 90 per cent of that console’s power. Scorpio was only using 60-70 per cent of its resources to run this demo.

That means developers will not just be able to boost the resolution, but add additional effects and such as well. And even if you don’t have a 4K TV, Microsoft will include options to make your games look better, whether by boosting performance or smoothing out jagged edges.

That said, we hardly have any information about how it looks yet, but it will “pleasantly surprise” us, according to Eurogamer. The most we know is that like the Xbox One S, it has an integrated power brick, and that the selection of ports is pretty much identical.

The specs and all are nice from a graphics perspective, but there’s more to Project Scorpio than that. The PS4 has been winning this console generation so far in part because it’s easier to develop for multi-platform games. With Project Scorpio, Microsoft is hoping to win developers back, including a number of toolsets that should make it easier to create games for.

This is particularly important because, again, Project Scorpio is not a next generation console, at least not in the traditional sense, even though the power upgrade is on a similar-ish scale. When developing a next-gen console, companies normally incorporate some new technology that breaks compatibility with the previous generation, and makes developers have to relearn everything. Not so with Project Scorpio; Microsoft simply gave developers a more powerful Xbox One to play with and optimize.

No, we don’t have a price, release date (it’s coming in the fall), or even a final name – Microsoft has to leave some things for E3. Still, definitely head on over to Eurogamer if you want a more in-depth breakdown and analysis of the specs – the site published five articles on the console this morning.

Read next: Macs are now compatible with Nvidia's most powerful graphics cards