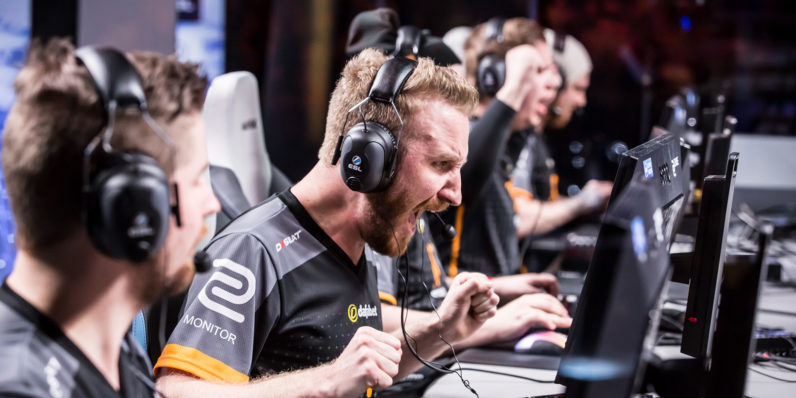 A study by non-profit research organization PLOS found that your brain’s reaction speed peaks at age 24. It looked at data comparing the time taken to make decisions by 3,305 people aged 16 to 44 in the strategy game Starcraft 2.

It’s worth noting that the successive decline in reaction speed is gradual, but in the world of professional gaming, every fraction of a second counts, and the tiniest delay in making a call in a competitive game can lead to a disastrous loss.

So where does that leave professional esports players, whose livelihood, reputation and legacy depend on their ability to make the right move at the right moment?

To find out, I spoke to players from some of the world’s best Counter-Strike: Global Offensive (CS:GO) teams at this year’s Intel Extreme Masters tournament in Katowice, Poland.

Snappi, aka Marco Pfeiffer, a Danish CS:GO player is 26. He says he doesn’t feel that slowed reflexes can affect a player’s chances at success in the game:

It’s been over-exaggerated. One of the best teams in the world (Virtus Pro, from Russia and Poland) have three players who are aged between 28 and 30.

Snappi also believes that there’ plenty more scope at this point for people to continue to playing professionally and honing their skills: ‘

Back when Counter-Strike 1.6 was popular (it was released in 2003), you could barely make $3,000 – $4,000 a month, which is tight in Scandinavian countries. So a lot of players who wanted to start a family, earn a better living or continue their education were forced to retire at an early age. Now that earnings have increased, CS is a more viable career choice and the dominance of Virtus Pro, with its older players, is proof of that (the team’s 30-year-old in-game leader Wiktor “TaZ” Wojtas became a father earlier this year).

I haven’t felt that at any point during my career thus far. I’ve been playing professionally for more than eight years and for the most part, my aim hasn’t failed me. I want to play for as long as possible, maybe until my abilities decline. But not immediately.

In fact, take a look at the current top-ranked CS:GO teams and you’ll find that, with the exception of Astralis, the average age isn’t lower than

In fact, some of the top-ranked teams in the world have players with an average age above 22, including the aforementioned Virtus Pro, SK Gaming, Faze Clan and Immortals.

Younger players don’t believe the hype about reflexes either. Jake “Stewie2k” Yip, who’s 19 and handles rifle duties for the North American team Cloud9, says that reflexes aren’t a major advantage for players his age, and likely not an issue for older veterans:

I think 30-year-old TaZ is a good example of an older player who’s still at the top of his game. It’s all about being dedicated to the game. The only advantage I have is that I’m really hungry for the game and want to play CS all the time, unlike others who might want to strike more of a balance between the sport and their normal life.

I actually think a lot of the older players on my team have better skills, reflexes and reaction time than me. I believe it has more to do with how you improve your game and practice. For me, I try to use grenades to get kills; if you’re killing someone blind, you don’t have to have crazy-fast reaction time. You actually have time to put a crosshair on their head and take them down. It’s not flashy, but that’s the tactic I’ve worked on.

Ultimately, it’s not a single factor that determines success in today’s competitive games: Tactics, spatial awareness, and clear communication have a lot to do with a team’s ability to win consistently. Hopefully, that means we’ll see even better players and more exciting games in the years to come.

Read next: Gain a competitive career advantage by getting certified in web analytics