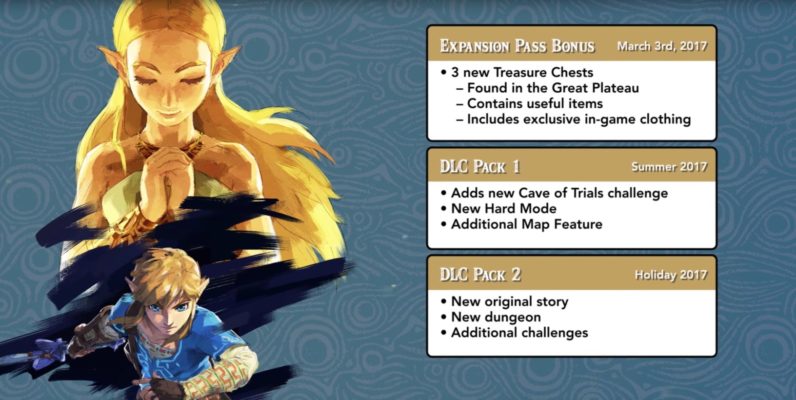 Nintendo just announced that The Legend of Zelda: Breath of the Wild, the flagship title for the imminent Nintendo Switch, is getting a $20 Expansion Pass. It includes three content packs divided into March, summer 2017, and holiday releases.

The first part of the pass includes three new treasure chests in the game’s Great Plateau area with some items and in-game clothing. The second includes a new challenge and a hard mode, while the last expands the game with a “new original story,” a new dungeon, and some more challenges.

At first, I didn’t know how to feel about it.

I’ve traditionally been in the “ugh, DLC” camp. Too often, I’ve seen developers release DLC “add-ons” that are really just features that should have been integrated into the game in the first place, or as patches to unfinished games. Clearly, I wasn’t alone:

DLC in a main Zelda game? Yeah idk how I feel about that.

Is Nintendo really THAT stupid? Adding stupid Season pass DLC in Zelda Breath of the Wild?
WTF! Is Nintendo trying to be like Activision? pic.twitter.com/UEaYyu3zrC

DLC Packs in Zelda: Breath of Wild. Not sure how I feel about it. Especially having to pay to play more of the original story. pic.twitter.com/Eg8NrCY019

And I mean, just look at the dislike ratio on the announcement video:

We Zelda fans just aren’t used to DLC. Sure, I recalled Nintendo has so far done a pretty great job at it, after taking a while to embrace it in the first place. But DLC so far has usually been multi-player games like Mario Kart 8 and Super Smash Bros Wii U.

Breath of the Wild is the first story-driven, single-player Nintendo IP to get a major DLC add-on.

There’s something odd about playing a Zelda game – games I’ve always thought of as complete, self-contained experiences – knowing that “a new original story” is coming a few months down the road. That’s an itch that will be hard to get rid of.

So when I began to write this post, I was prepared to rant about all the things wrong with DLC and how it doesn’t belong in the Zelda series. But after mulling on the idea and discussing with coworkers, I have cautiously come to terms with it.

For one, Nintendo is selling the Expansion Pass as a full unit (you can’t buy the individual content packs separately), meaning that you’re getting a fair bit of content for your money – even if you have to wait almost a year for the full DLC to arrive. It’s also worth noting Nintendo has previously released expansions to older games, as seen in Ocarina of Time’s Master Quest.

Most people don’t really have a problem with DLC as a concept that adds replayability or customization to a finished game; it’s when DLC is used as a lazy way to make more money that it becomes a problem. But this is Nintendo we’re talking about; it’s been slow about DLC precisely because it doesn’t want to run the risk of lowering the quality of its games. Nintendo’s IPs are the heart and soul of the company.

Besides, the Nintendo Switch is going to have precious few AAA titles for most of its first year. You’re going to appreciate having a few extra challenges to go around in Zelda a few months after it’s released. The Hard Mode alone might be worth a full replay, especially if it switches up the dungeons a la Master Quest.

But more than anything, I remember what Satoru Iwata told Kotaku in 2012:

One thing Nintendo has determined as a company policy, what we are not going to do is create a full game and then say, ‘let’s hold this back for DLC.

As long as those words still ring true, Zelda will be okay.