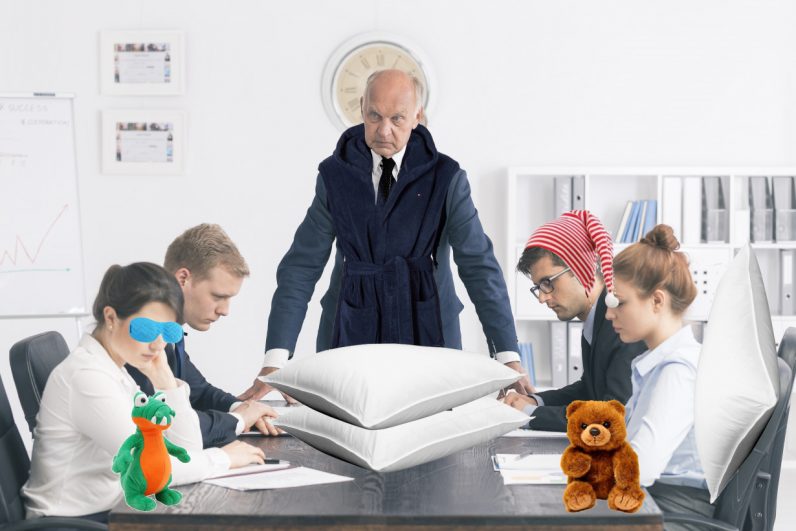 Quick question: How many hours did you sleep last night? If you made it to eight hours, chances are you’re not a newbie parent. Oh, and you may have made it to the higher ranks of your company— as research shows senior executives get more sleep than anyone else.

But what about the rest of us? The ambitious interns, the middle managers, the entry-level employees? Although it does depend on where you live — as a Dutch woman, apparently I’m the human equivalent of a sloth sleeping 8.4 hours every night — most people don’t make it to the recommended eight hours. Americans currently average at 6.8 hours of sleep, with less than a half of people under the age of 50 feel they’re getting enough sleep.

Why is this a problem?

While sleep deprivation can cause all kinds of problems on a more personal level — anxiety, depression, and weight gain, among many others — it also harms work performance.

People are less productive and more prone to illness when they don’t get enough sleep. In other words, poor sleeping habits in employees are costly for employers. Research estimates that lost productivity due to poor sleep cost $3,156 per employee with insomnia and about $2,500 for those with less severe sleep issues.

Then there’s the social side-effect of bad sleeping habits: People are more likely to misbehave when they’re not properly rested. A 2017 study by the Erasmus University Rotterdam showed that people tend to misbehave the day after a bad night’s sleep. They are more likely to lash out at co-workers, leave early without telling the boss, and taking longer lunch breaks — the bad employee trifecta.

“A good sleep regimen can practically turn one employee into two,” Dan Pardi told me in an interview. He’s a sleep researcher and CEO of humanOS.me, a personal health performance platform. “It’s not just that we get more work done, we also have far better access to mental performance needed to do our hardest work — like writing, dynamic speaking, or innovative creativity.”

So how much sleep do we need, anyway? According to Pardi, the established magic number for most people is somewhere between seven and nine hours in bed. You might not actually be asleep that whole time but you’ll likely get the sleep you need if you’re in bed within that range of time.

Some people truly need more and some need less and the amount of sleep you need can change from day to day depending on what’s going on in your life. Are you fighting an infection or are you recovering from a hard workout from the day before? All of this can cause variation into how much sleep you actually need night by night.

Why this is on you, the employer

Simply put, employers have a responsibility to keep their workers healthy and happy — and this involves getting sufficient sleep. According to sleep researcher Daniel Gartenberg, who was interviewed by Quartz, we should think of sleep as the new worker’s rights.

“We’re being worked to the point that we’re not sleeping, and it’s having physical determinants on our health and wellbeing,” Gartenberg argued.

Getting paid to sleep more

To some extent, technology can help facilitate healthy sleeping habits. Some employers are already experimenting with such tools to get workers in bed. Mattress company Casper promotes healthy habits by paying employees for being well-rested (exercising is rewarded as well). The employees can track their sleep habits through a fitness app and earn up to $60 monthly, just by getting the recommended amount of sleep.

Others stimulate napping at work, so employees can get a little break in between working hours. Ben & Jerry’s was one of the first businesses to install a napping room more than 10 years ago. Now, most big tech companies offer some form of office napping; some by setting up dedicated rooms, others by installing high-tech napping pods.

These futuristic-looking eggs — we have one at TNW’s offices in Amsterdam — come with audio “dreamscapes” that help you fall asleep. The soundscapes are based on insights from psychoacoustics, the scientific field that studies sound perception.

“We’re still in the early stages of understanding how this works,” says Pardi. “But in the future, technology might be able to intervene while we sleep so we can sleep more deeply.”

An interesting area being explored is the utilization of “pink noise” during sleep. It’s similar to white noise, but with sounds balanced across the frequency spectrum. “Several research experiments show that pink noise increases time spent in slow wave sleep, a type of sleep associated with our memory and keeping the brain healthy over time,” explains Pardi.

There are several devices that claim to improve the restorative sleep phase, such as this wearable headband and this smart pillow that was tested by one of our writers. A cheaper alternative would be to download one of the many pink noise apps available in the app stores.

Sound isn’t the only way to better sleep; some companies are looking towards adaptable lighting to stimulate sleep. Blue wavelengths of light, according to this research, suppress the hormone that helps make us drowsy, called melatonin.

So by offering “human-centric” lighting plans that change in color and intensity during the working day, the circadian rhythm can be influenced. Or so is the idea. Though it’s a rather new field — propelled by the emergence of LED lights — commercial lighting companies such as Philips and Glumac are already offering human-centric lighting plans for the workplace.

“In badly designed buildings, people don’t see enough daylight during the day and are bombarded with artificial lighting at night, which negatively influences the human wake/sleep cycle,” she says.

“We aim to fix this by developing nurturing environments, like the one in EDGE Olympic, where we have maximized daylight indoors. In addition, there are plenty of opportunities to step outside and catch some sun on one of the large terraces. And during the darker winter months, EDGE Olympic has circadian lighting. We hope this helps people to better concentrate during the day and sleep deeper at night.”

Other employers came up with even more niche solutions to aid their exhausted workers, like these tech companies offering $1,200 smart cribs to newbie parents. The bassinet soothes babies by playing white noise and has sensors to pick up on cries, that can be controlled using an app. Rested parents make better employees, is the idea here, so the crib is simply an investment that will bring in returns in the form of better workplace performances.

Do we really need more tech to solve an issue that’s partly caused by tech? Peering at our smartphones at night just to see whether our kids are still asleep? “Technology can be a powerful tool to enhance healthy habits,” says Pardi. “But there’s a societal misconception that tech will do the work for you; like a shot of antibiotics curing an infection. That’s not how it works. Tech is most effective when it empowers you to be a more effective agent at managing your self-care practices in your life.”

A cultural change is needed as well. Employers could offer flexible working hours, for example, to better fit their workers’ needs and sleeping habits. People fall into certain sleep chronotypes, meaning some of us are early risers while others are more productive later in the day, Pardi says.

Fifteen percent of us are late chronotypes, another 15 are early, and the rest is somewhere in between. “Forcing the late starters to begin at 8 or 9 AM means your enforcing underperformance in those individuals—it’s almost like you’re keeping them in a jetlagged state day after day.

Pardi considers it his mission to spread the gospel of personal health for professional performance. He and his team has given several keynotes on the subject, for example during the recent Biohacker Summit and with US Special Forces, and he hosts a podcast for which he interviews other researchers.

Things are changing, he notes. “In the past decades, specifically in the United States, we had this idea that sleep should not get in the way of a serious career — more working hours meant more success. In his inauguration speech, Bill Clinton mentioned ‘he would work day and night for the American public’. That idea is outdated and, in fact, the opposite is now fashionable: If you’re serious about your work, you take care of your health.”

Though sleep and its relation to health and work performance are gaining momentum, many companies still need to make this part of their culture to reap all the benefits, Pardi concludes. “Get informed, stay up to date on sleep research and offer support where possible. Once you do, everybody wins.”

This post is brought to you by EDGE Technologies