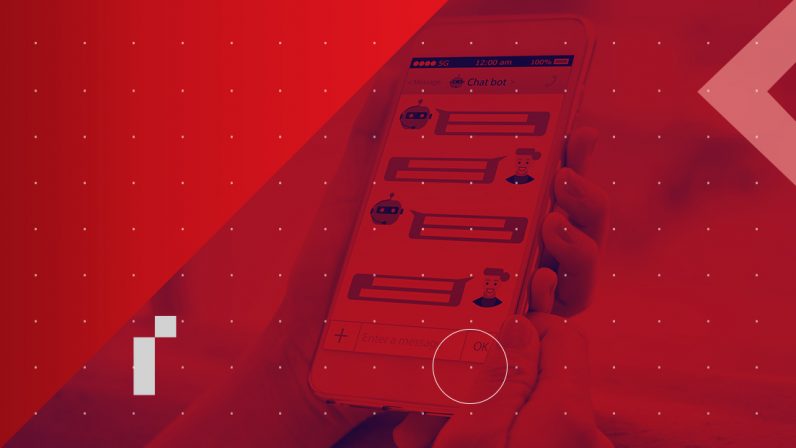 Artificial intelligence (AI) has made its mainstream commercial debut in the form of chatbots. Organizations of all sizes are building simple messenger bots to be more accessible to their customers, particularly in support scenarios.

Rather than directing people to a generic email address or helpdesk, chatbots use logic to help people answer questions, faster. It’s like conversing with a human being — except you’re talking with a robot.

Chatbots are especially valuable for smaller, resource-strapped organizations. It’s well-known that companies of all sizes build stronger, more empathetic relationships when they make themselves available to customers.

Chatbots may seem sophisticated to build to the casual observer, but they aren’t as complicated as they seem.

“A chatbot is an agent that is programmed to appear intelligent and can only do so in rigidly predefined scenarios,” says Srinivas Seshadri, director of marketing at product engineering firm Ideas2it, a company that builds chatbots for retailers.

Simple yet impactful chatbots are possible to build without prior coding knowledge. Follow this framework to build yours with fewer resources, in a matter of hours.

Flow.ai is one tool that allows people to build chatbots without programming expertise. Consisting of a team of designers, technologists, and academics, the Netherlands-based company describes itself as analogous to software like Adobe Photoshop from a user experience perspective. What the software builds are apps that fulfill specific purposes.

“A successful chatbot either solves a problem or adds gain,” says Murat Ozmerd, co-founder at Flow.ai. “It handles that part of the interaction where natural language is the best choice of communication, and it does that well.”

“The NLP engine uses neural networks to determine the intent of a specific utterance and it can extract important entities such as dates and locations from the text,” says Ozmerd.

“All this is customizable and trainable by the person building the bot. Because in the Flow.ai platform all services are integrated, contextual information (how is the conversation unfolding) is fed to the neural net as well, allowing it to make more informed decisions.

In this way, the engine allows the user to model more complex conversational flows like switching of conversation topics during a chat or getting contextual information from for example website browsing behavior.”

# Use automation strategically, never replacing your organization’s human side

Chatbot AI might be intelligent enough to make simple judgment calls, but what you build won’t have the emotional intelligence to replace human empathy.

“Investing in AI-powered robots is a smart business move if a company primarily wants to lower costs,” says Holger Reisinger, senior vice president of large enterprise solutions at Jabra, a Danish company that makes intelligent headphones that are smart enough to give coaching to athletes on the move.

“However, if the goal is customer satisfaction, things look completely different. Robots can’t yet give verbal cues, such as the occasional ‘mhm,’ that assure us someone is listening. They also can’t apply empathy and morals to thorny situations. These deficits prevent robots from solving complex, individual problems that a customer might not even be able to identify themselves.”

The biggest drop in the American Customer Satisfaction Index since the mid-90s happened between 2013 and 2015. This is a time period in which many technological shifts have been happening including increasing access to the internet, the growth of marketplaces and independent ecommerce stores, and changing customer expectations for faster service.

There is a need in the market for businesses to provide more empathetic and knowledgeable customer service agents. Despite that sobering statistic, 32 percent of organizations plan to shift customer service from live assistance to automated service, denying customers the chance to more effective conversations and interactions with brands.

“As businesses consider implementing AI and machine learning in contact centers, remember that technology shouldn’t replace humans,” says Reisinger. “Instead, it should enhance their productivity and allow humans to engage and foster relationships with customers that differentiate your brand. Ensure that  your organization doesn’t become a faceless entity.”

Chatbots aren’t people, so avoid using them as people-replacements. Instead, think of chatbots as a tool that enables lives to become better.

# Prioritize security as must rather than an afterthought

Chatbots are new digital communication mediums, which means that they bring new vulnerabilities to businesses. Anyone who’s responsible for building a chatbot needs to take steps in the planning to prevent a potential security breach. Every conversation opens up a new channel for a bad actor.

The extent to which security impacts everything digital does not need rehashing. To understand what an important consideration security is becoming—for every micro-decision that even the smallest ventures must make—take a look at this report from the University of California at San Diego, Saarland University, and the University of Twente,  to see how far and wide attacks are reaching.

“Even non-technical people can launch significant attacks through DDoS-as-a-Service providers (i.e. Booters),” said Mattijs Jonker, the study’s first author. “People can pay others with a subscription in exchange for just a few dollars.”

To counter potential bad actors — chatbot users that may appear to be automated or bots —it is important to understand where to focus on taking precautions. The key is to focus on why customers are engaging in chatbot conversations so that you can implement security protocols, unique to your company, as preventative measures.

Here is some data that Sam Katzen, PR manager at Fiverr, which offers a services marketplace, shared in an interview, after running an analysis of high-volume searches on the platform’s marketplace data. For context, the company recently opened a chatbot development service on its platform. This data may help chatbot builders understand how to build security programs into their strategies.

Fiverr is using chatbots to help small business owners automate communication in its environment that supports many transactions.

“Small business owners and entrepreneurs are starting to recognize chatbots as a solution for that,” says Katzen. “Over half of internal Fiverr survey respondents (60%) said they have considered or might consider using one for their business.”

Do the brain-work, so your chatbots do the grunt-work.