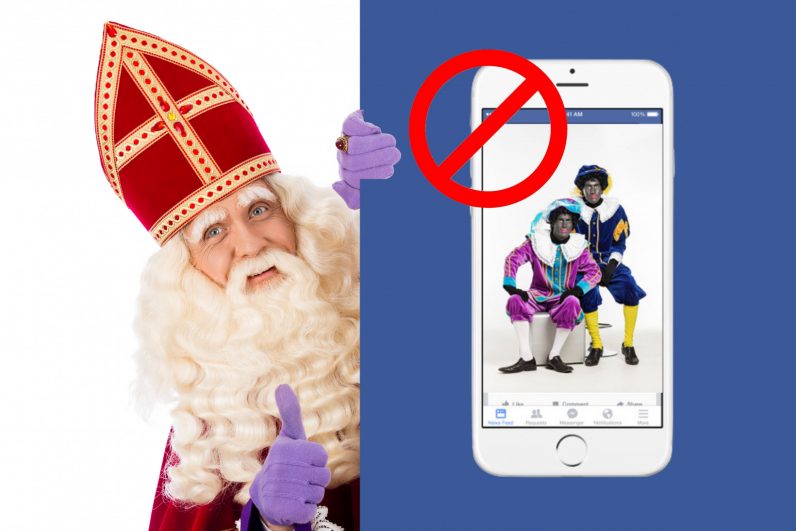 In an update to its community standards, Facebook just announced it will no longer allow depictions of Zwarte Piet (or Black Pete) on Facebook and Instagram. This racialized character is part of a Dutch December holiday, Sinterklaas, that celebrates the holiday of Saint Nicholas.

Sinterklaas is depicted as a bearded, white gentleman (a thinner Santa, basically) while the Black Petes, his ‘helpers,’ appear as blackface characters with large gold earrings and exaggerated lips.

The question of whether or not Zwarte Piet is racist and should be banned completely is among the most heated and polarizing Dutch debates of the past decade.

Images of Black Pete (or blackface) can be reported to Facebook and Instagram and will be removed, if they show:

There are some exceptions, such as when the images are accompanying news articles about Zwarte Piet.

While an increasing number of cities are now opting for Petes of different colors or use black smudges instead of blackface, many Dutch people are still firmly opposed to making any changes  — often voicing their opinions via Facebook.  For example, the Facebook page “Actiegroep Pro Zwarte Piet,” supporting the traditional depiction of Black Pete, has close to 50K followers.

Zwarte Piet is not the only problematic item on Facebook’s list. According to the update, the company will also ban other offensive racial and religious stereotypes, such as Jewish caricatures and calling Muslims “pigs.”

Read next: Xiaomi made a transparent OLED TV — and it's actually for sale