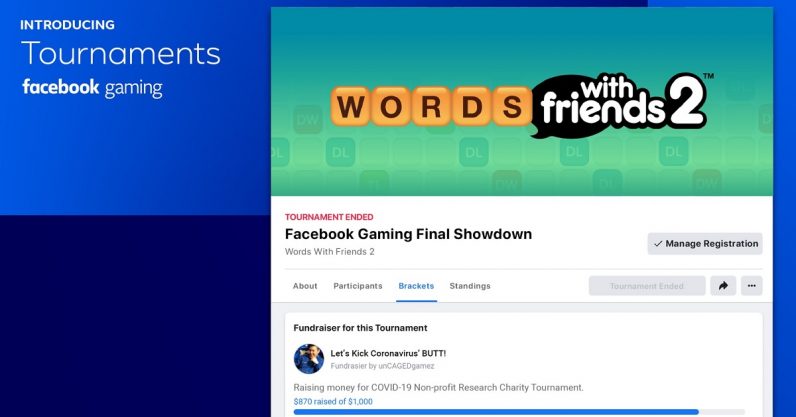 Facebook today rolled out Tournaments, a feature of its Gaming platform that allows users to put together a gaming competition. It’s apparently good for esports, though it’s intended for regular users who might want to have some competition while social distancing.

1/ Social distancing means we have to be apart, but games can still bring us together. So today we’re opening early access to Facebook Gaming tournaments, a feature to help people stay connected through games. pic.twitter.com/rYOIXBcIHS

While still apparently in early access, Tournaments are open for anyone to use. You can organize one from the “Create tournament event” option in Facebook Gaming. Facebook added in a Twitter announcement (ironically) that streamers could also use Tournaments to host charity events, as their livestreaming tools now include support for that.

Read: How to make the switch to Facebook’s new design right now

Tournaments were apparently intended to help Facebook set up an esports platform, but the current world situation prompted the company to roll it out early. The conceit is that regular gamers could use the feature to put together their own social distancing gaming tournaments. Mina Abouseif, the engineer behind Tournaments, told VentureBeat:

Tournaments is also part of Facebook‘s efforts as part of the World Health Organization’s Play Apart Together campaign, the point of which is to encourage people to get their social interaction via gaming. So the idea is that, if a group of people want to have a little competition — say for example, a group of streamers — then this will make it easier.

Facebook‘s been trying to make its Gaming platform into a streaming/esports haven for a while now, even going so far as to join the fight over popular streamers. So far, it’s signed a number of popular streamers to the platform, and Tournaments would be the next big boost to its profile.

You can find all the Tournaments people are setting up — or set up one of your own — here.