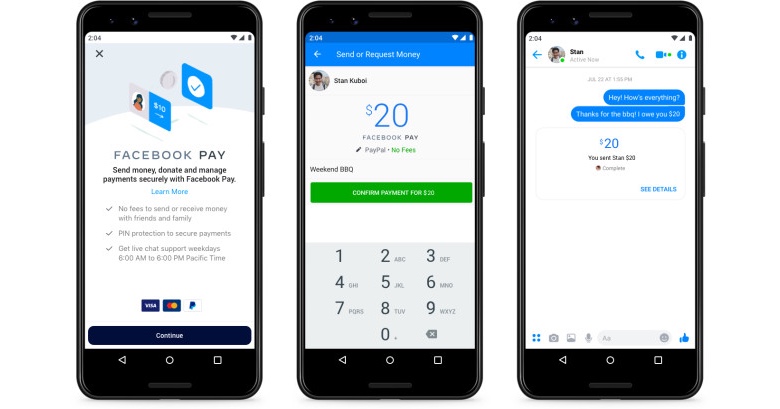 You can add your debit or credit card to Facebook Pay and choose if you want it available in certain apps or all Facebook apps. In the beginning, the service will be available on Facebook and Messenger to pay for fundraisers, in-game purchases, event tickets, person-to-person payments, and select pages on Facebook Marketplace.

It’s important to note Facebook has been testing WhatsApp Pay in India for more than 18 months. In July, the company confirmed it plans to roll out the full version of the service by the end of the year. However, earlier this month, India‘s central bank, the Reserve Bank of India (RBI) told the Supreme Court the company is not yet compliant with the data localization norms. This might hit a snag to the service’s launch plans.

In the US, the company will compete with some of the big names in the industry such as Square, Venmo, Google Pay, and Apple Pay. It will hope that its huge userbase will come to its fore to make this project a success. However, not a lot of people might comfortable to make payments on Facebook given its shabby record of handling personal data.

In retrospect, people might want to use it to purchase goods directly from Instagram or send money to family members or friends on WhatsApp.

Facebook Pay brings the company closer to Mark Zuckerberg‘s vision of harmonizing all of Facebook‘s apps. But it’s too early to tell if rolling it out across apps is a good idea for the company.

Read next: Safari gets support for hardware security keys with iOS 13.3