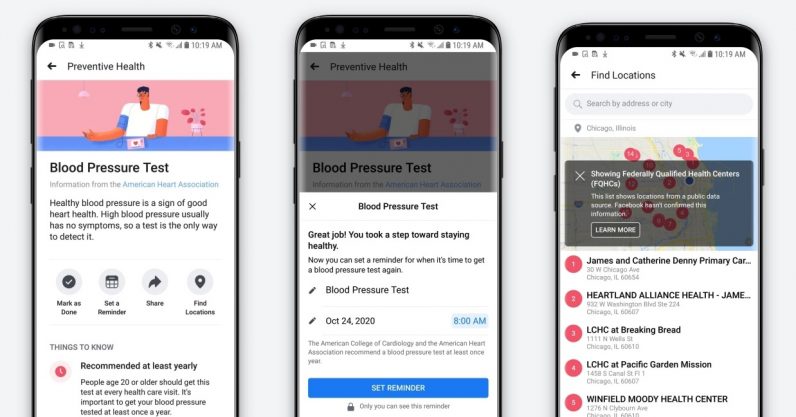 Facebook wants to remind you to see a doctor. It’s working on a suite of “Preventative Health” features designed to help people keep track of their personal maintenance. Is it just me or does this company seem like a bad choice for that role?

Facebook today announced it’s working with major health organizations to integrate health reminders into the platform. The Preventative Health tool will tell users what kinds of check-ups are recommended for someone of their age and sex, as well as the optimal time for a flu shot. You can then set yourself a reminder, using the tool, to get these check-ups, which can include cholesterol checks and mammograms.

This isn’t a wholly bad idea — there’s nothing wrong with people keeping on top of their medical health. And Facebook is quick to point out that, while it would offer the reminder, the actual test results or patient records would never be shared with it. So that somewhat eliminates the concern that Facebook would have access to health data.

And it’s not as though Facebook‘s the only company out there lobbying to have more access to my physical stats. Apple’s got its health apps, Amazon’s launched HIPAA-compliant medical skills for Alexa, and most recently Google’s apparently trying to buy Fitbit.

But I can’t shake the feeling that, if I were to actually use this to schedule, for example, a blood pressure test, I would start seeing ads for pills to reduce high blood pressure or meditative apps guaranteed to lower same. Facebook‘s managed to wriggle into my business enough that I get ads for products I’ve literally just spoken about to friends in person and have never even looked up (yes, this bothers the heck out of me — and no, I’m not going to let it go). I’m not sure I need Facebook to know even more about me than it already does.

There have been rumors about Facebook working on health-based features for years now. It apparently put the brakes on a project that involved anonymized health data from US hospitals in the immediate aftermath of Cambridge Analytica, guessing (accurately) that we’d all be really suspicious of Facebook having any more of our deeply personal data. And it’s not as though Facebook isn’t already getting a dripfeed of that elsewhere — just last month, period tracker apps were caught sharing health data with the site.

That said, the feature that sounds the most helpful is one which shows users Federally Qualified Health Centers in their area where they can receive their preventative health care regardless of their ability to pay. As Facebook accurately pointed out in its statement, not everyone has insurance (under which these screenings are usually free). Assuming that actually works, it could serve a genuine need among those who might otherwise not consider getting their preventative tests.

Read next: Samsung teases another folding phone, but this one's a clamshell