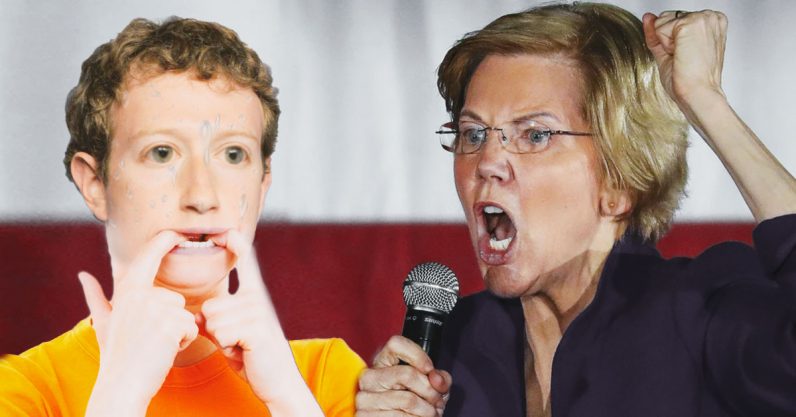 Facebook CEO Mark Zuckerberg is getting his employees ready for what could turn out to be the biggest threat his company’s faced yet: a 70-year-old woman from Oklahoma.

Of course, democratic presidential candidate Elizabeth Warren isn’t just anyone. She’s the woman with a plan for everything. Healthcare? Fixing the deficit? Climate Change? Warren’s got a plan for that.

She also has a plan for Mark Zuckerberg, Jeff Bezos, Jack Dorsey and other big tech CEOs: if she’s elected she’ll do everything in her power to break up their monopolies in order to stop anti-competitive mergers.

Let's talk a bit about my plan to #BreakUpBigTech and why it's got Mark Zuckerberg so worked up.

This plan has apparently gotten under Zuckerberg’s skin. Leaked audio from an internal employee Q&A session, obtained by The Verge, showed the CEO name-checking Warren personally as an example of the company’s impending existential concerns:

So there might be a political movement where people are angry at the tech companies or are worried about concentration or worried about different issues and worried that they’re not being handled well. That doesn’t mean that, even if there’s anger and that you have someone like Elizabeth Warren who thinks that the right answer is to break up the companies.

I mean, if she gets elected president, then I would bet that we will have a legal challenge, and I would bet that we will win the legal challenge. And does that still suck for us? Yeah. I mean, I don’t want to have a major lawsuit against our own government. I mean, that’s not the position that you want to be in when you’re, you know, I mean … it’s like, we care about our country and want to work with our government and do good things. But look, at the end of the day, if someone’s going to try to threaten something that existential, you go to the mat and you fight.

What would really “suck” is if we don’t fix a corrupt system that lets giant companies like Facebook engage in illegal anticompetitive practices, stomp on consumer privacy rights, and repeatedly fumble their responsibility to protect our democracy. https://t.co/rI0v55KKAi

And Zuckerberg let everyone know he was having a normal one:

While it may seem perfectly normal for a billionaire tech mogul who’s amassed his wealth by gobbling up the competition like an ugly Katamari to take objection to the idea that the next US president might be elected on a platform of breaking up his empire… Facebook is no ordinary company.

Due to its recent decisions to pivot from a “social network” to a full-fledged member of the editorial business that curates articles for billions of people, Facebook has the power to exert great influence over democratic elections. In fact, not only does Facebook – and by extension Mark Zuckerberg – have the power to interfere in an election, it has the blueprint for doing so on its own platform in the 2016 Cambridge Analytica scandal.

There’s absolutely nothing whatsoever stopping Facebook from “tweaking the algorithm” to ensure positive coverage of Warren languishes while negative stories find their way all over. That may sound like a conspiracy theory, but so did the Cambridge Analytica scandal and the state-run Russian interference campaign during the 2016 elections — and both of those have been proven unequivocally.

There’s no reason to believe that Zuckerberg or other agents at Facebook are going to purposely use the ubiquitous reach of their platform – which includes Instagram and WhatsApp – to socially gerrymander a US election. But there is precedence, motive, means, and opportunity.

Can Mark Zuckerberg be trusted with the 2020 US presidential elections? Is Warren’s ambition to take on big tech a reason to vote for or against her? Let us know what you think in the comments.