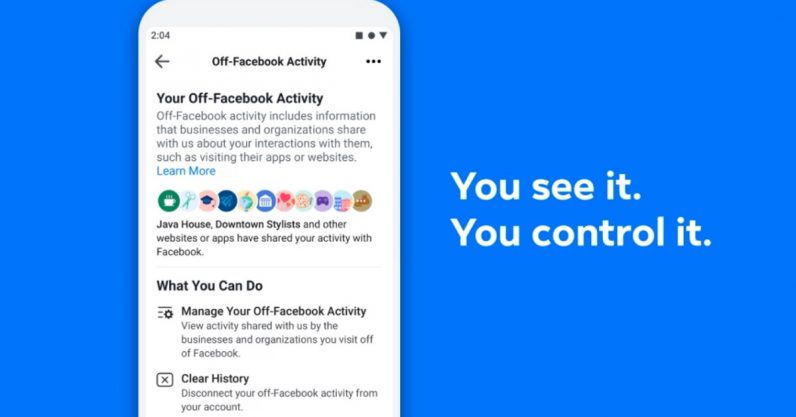 Facebook is offering new privacy tools that allow users to personally manage how much dirt on your browsing and spending habits Facebook gets from other websites — in theory, at least.

Have you ever been browsing Facebook and noticed an ad for something you were looking up on another website not five minutes ago? If you’re like me, you immediately cringe in recognition of just how much Facebook has access to. It feels as though the site knows everything.

Today, we're starting to roll out Off-Facebook Activity, a new feature that gives you more control over your datahttps://t.co/GXpWUKeAyL

Enter Off-Facebook Activity. This is a page where you’ll be able to see where Facebook‘s getting all your data from, and, allegedly, put a stop to it should you so choose. According to Facebook, you’ll have a list of the apps and sites sending Facebook your data, and you can either clear your entire activity history or turn off future data collection, either from everyone or from specific sites.

This is essentially the feature Mark Zuckerberg promised over a year ago (he promised at the time it would take a “few months”). It was intended to allay fears over data collection after they reached a fever pitch after the Cambridge Analytica scandal. Better late than never?

But here’s the twist: It doesn’t actually delete any of your information after you clear your activity or disconnect it from your account. To quote Erin Egan, Chief Privacy Officer and David Baser, Director of Product Management, in the announcement:

If you clear your off-Facebook activity, we’ll remove your identifying information from the data that apps and websites choose to send us. We won’t know which websites you visited or what you did there, and we won’t use any of the data you disconnect to target ads to you on Facebook, Instagram or Messenger… Our engineering teams redesigned our systems and built a new way for them to process information.

It’s not going to stop collecting the data — it’ll just scrub any of your personal info from it. There also remains the problem of just how many people are going to bother accessing and changing any of this info.

Considering how much money Facebook makes off of ads, it seems like this peace offering is a bit of voluntary self-flagellation. Don’t think I didn’t notice the slight guilt trip in the announcement: “We expect this could have some impact on our business, but we believe giving people control over their data is more important.”

The feature is only available in three countries at the moment: Ireland, Spain, and South Korea. Facebook says it’ll be rolling the feature out to more countries “over the coming months to help ensure it’s working reliably for everyone.” We’ll have to see how good the tools are once they’re available to us.