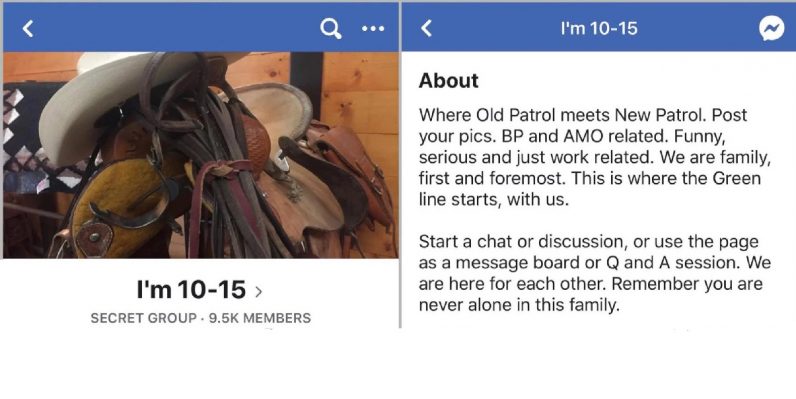 Investigative journalist A.C. Thompson from ProPublica today exposed a secret Facebook group for US Border Patrol agents full of racist and misogynistic comments and memes, including calls for violent action against immigrants and Democrats.

The group, called “I’m 10-15,” a reference to the Border Patrol code for “officer in custody of alien,” has over 9,500 members and began in 2016. According to its introduction page it exists to serve as a Facebook “family” for Border Patrol agents:

Per the ProPublica report, agents on numerous occasions engaged in commentary or shared memes illustrating a community-wide hatred for undocumented immigrants, liberals, and Democrats.

One agent mocked the drowning deaths of an immigrant father and his two-year-old child, questioning whether an AP photo of the tragedy was faked as part of a liberal conspiracy. In another post, an agent shared a meme depicting US President Donald Trump raping US Representative Alexandria Ocasio-Cortez with the caption “That’s right bitches. The masses have spoken and today democracy won.” Others cheered or shared mocking GIFs in response to posts about migrant children dying in Border Patrol custody.

There are 20,000 TOTAL Customs & Border Patrol agents in the US.

9,500 – almost HALF that number – are in a racist & sexually violent secret CBP Facebook group.

They’re threatening violence on members of Congress. How do you think they’re treating caged children+families? https://t.co/AfDB50cgHQ

I see why CBP officers were being so physically &sexually threatening towards me.

Officers were keeping women in cells w/ no water & had told them to drink out of the toilets.

This was them on their GOOD behavior in front of members of Congress.

Now I’ve seen the inside of these facilities.

It’s not just the kids. It’s everyone. People drinking out of toilets, officers laughing in front of members Congress.

I brought it up to their superiors. They said “officers are under stress & act out sometimes.” No accountability.

ProPublica spoke with sociologist Daniel Martinez from the University of Arizona, an expert on the border. He called the group xenophobic and sexist. And, according to the report:

The postings, in his view, reflect what “seems to be a pervasive culture of cruelty aimed at immigrants within CBP. This isn’t just a few rogue agents or bad apples.”

Ironically the increased security after the Cambridge Analytica scandal has made these sorts of investigations more difficult. When Reason conducted its investigation it used openly available data from Facebook to sort through tens of thousands of profiles. Now, these tools are no longer available. The ProPublica report relied on screenshots and individual verification.

This means we’re only seeing the very tip of the iceberg when it comes to the amount of US law enforcement agents who actively engage on social media in white supremacy groups, hate speech, and calls for violence against immigrants, women, and those who disagree with their political dogma. The ones exposed in these reports are those who openly display their names and occupations in their profiles. Those who’ve taken even the most modest of precautions to obscure their identity aren’t included.

Law enforcement officers who engage in these reprehensible activities directly contribute to the destruction of the public trust. Especially as it continues to appear that the agents doing so no longer represent an insignificant percentage of all officers.

TNW reached out to the Department of Homeland Security for comment. We’ll update this article if we receive a response.

Read next: You can’t offer to Murder cops on Reddit unless you’re on R/The_Donald

Read next: Samsung CEO admits pushing Galaxy Fold ‘before it was ready’