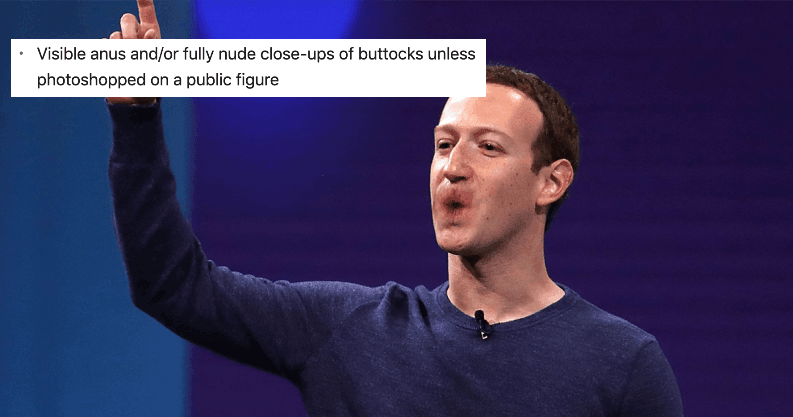 I’m now aware of something I wasn’t before: Facebook‘s guidelines on adult nudity and sexual activity. And let me tell you something – they’re wild. Basically, these are the policies the social media giant uses to define whether something is too sexual to be allowed on the platform.

We were alerted to them by Twitter user GordyPls and you can read the whole thing here, which I suggest you do.

Now, as is only right, we need to take a deep dive into this document. We need to understand it, to analyze it, to become it. So, first things first, let’s look at its vocabulary.

The most common words used in the guidelines

We pumped the text from Facebook‘s guidelines into an online tool, which gave us these results:

Unsurprisingly, “sexual” is high up on the list. Also, “genitals” and “genitalia” get mentioned a lot, but… “anus?” That’s so… specific.

All this leads me to believe is that there’s a lot of butt stuff being posted on Facebook. With this in mind, I have one simple request: GIVE ME THE ANUS, ZUCKERBERG, YOU COWARD!

The most common two word phrases used in the guidelines

Similar to the last list, the first two-thirds of this are dull. It’s just normal, business speak with a sprinkling of sex, but when we get to the bottom third? We’re in anus/genitalia city, baby!

Even after researching, writing, and proofing this piece, I’m still in love with the scientifically-graphic vocabulary nestled in what’s basically a corporate terms and conditions sheet. For once you’ve done good, Facebook.

Next, let’s dive deeper into the guidelines, so…

Buckle in, it’s gonna get weird.

This was the term originally shared by GordyPls. In his words – because we can’t possibly improve them – “Facebook‘s community standards specifically permit photoshopping an arsehole on a politician.”

By-products? Okay then. Here’s a list of things that, if taken literally, you’re not allowed to show on Facebook:

Basically, if you’re wearing a thin shirt, you can stimulate your nipples all you want.

Also, what happens if it’s freezing out and – as is so often the case – I happen to be flexing and shirtless? Are we really ready to call something as common as a cold spell a “nipple stimulator” now? Are we? Doubt it.

No one voted for that Brexit.

Can I understand why you can’t get Facebook-freaky with bodily fluids? Yes, of course, but I like the image of a gowned Zuckerberg sat at his ornate wooden desk, staring out over his vast estate, and slowly typing out “faeces, urine, spit, snot, menstruation, or vomit.”

A serious point before we leave

All-in-all, these guidelines are wonderful. I can’t tell whether the people writing them were joyous for this opportunity, or aghast at having to do it.

But, there’s one element of this whole thing that’s ridiculous and, in my view, unforgivable:

You know what? Fuck you, Facebook. A ban on “uncovered female nipples?” Fuck you.

Let me put this simply: women’s bodies should not be policed differently to men’s. Either allow nipples from all genders to be shown, or none. How’s that so hard to grasp?

Anything else is discriminatory and dumb.

At TNW 2019, we have a whole track dedicated to shining the light on women in technology. Find out more here.

Read next: TNW2019 Daily: How to get your boss to buy tickets for your whole team