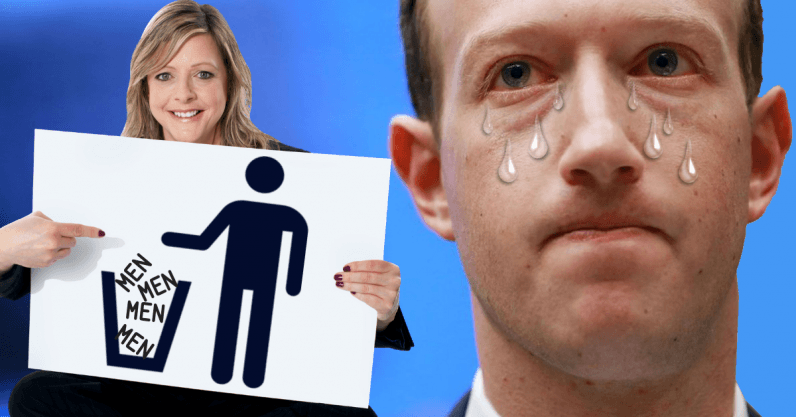 I recently wrote an article about an Instagram account that documents disturbing messages women receive on dating apps from men they’ve rejected.

After it was posted on Facebook, it didn’t take long for the messages to roll in: “I call bullshit on this story,” “Women are con artists — if you do anything I don’t like I will bury you. MGTOW [Men Going Their Own Way] is the way,” and “Feminists should be burnt on a bonfire! Let the witch hunt begin!”

After this somewhat expected response from the friendly MGTOW community, our social media manager thought it would be fitting to make the article’s Facebook caption: “This Instagram account proves that all men are trash.” Which resulted in TNW’s first 24-hour ban on Facebook.

The Facebook police quickly removed the post, citing “hate speech” as the reason. Yep, you read that right. Hate speech.

But what’s truly interesting here is the disparity in Facebook’s reactions. The social media giants thinks “men are trash” is more offensive than “Feminists should be burnt on a bonfire.”

As a twenty-something female living amidst the #metoo movement, I’ve gotten used to casual statements like “men are trash.” It’s usually said during drunken conversations or posted on social media in response to something Donald Trump (or some other white guy) has recently done.

You might think it’s just another hyperbolic, offhand remark — but Facebook disagrees. When the MGTOW community and others flag it as hate speech, Facebook perks up its ears.

However, people have had enough of Facebook’s empathy towards angry white men. Kayla Avery, a comedian, created Facebook Jailed after being banned 10 times for alleged ‘hate speech.’ The site documents users’ stories of being banned whilst also proving that Facebook has double standards when it comes to monitoring sexist and hate speech.

Update: “Men are scum/ugly/trash/theworst” posts get removed (quickly) no matter the context and get you suspended.

“Women are scum” – reviewed and found by FB not to violate standards. pic.twitter.com/ebEXK6xG7Q

TNW reached out to Kayla Avery, the founder of Facebook Jailed, to find out why she created the site: “I got the idea for the website when I got connected with another woman in comedy, Marcia Belsky, based in NYC who got banned for 30 days around the same time as I did for a post that was very similar as hers,” explains Avery.

“After going back and forth with her about our various Facebook bans over the past year, it gave me this gut feeling that this wasn’t just a bizarre circumstance of just one person reporting our posts, but more of a Facebook internal business practice causing certain posts to be removed.”

Avery noticed very early on that there seemed to be a pattern in the posts that get flagged as violating standards. “The posts were always ones that referred to or regarded men either in general or in a hyperbolic sarcastic way,” says Avery.

After Avery and Belsky found other women on social media had also been banned from Facebook for the same reasons, they decided to help give a voice to users that are essentially getting punished by Facebook for being a woman.

“Their community standards guidelines prioritize white men over everyone else, as well as showing the plethora of actual hate speech content that doesn’t get removed by Facebook,” explains Avery.

Why ‘all men are trash’ isn’t hate speech

Since the #metoo movement gave thousands of women the confidence to speak out about sexual assault and abuse, many took to social media to share their experience.

The other half of Facebook Jailed, Marcia Belsky, was suspended for 30 days after commenting “men are scum” underneath Nicola Silverberg’s post detailing the abuse Silverberg had received after writing a list of ways men can treat women better on Twitter.

It’s possible that when women hear about someone being sexually assaulted and say “men are scum,” maybe they don’t literally mean it. Just maybe.

Keep in mind, this dude called me a cunt on 4 of posts yesterday & I reported all of them. His profile and comments? … still chilling. pic.twitter.com/UJvlXGP9ug

Not only is context important, but meaning is too. From the surface, admittedly saying “men are trash” looks like you’re simply a hater of all men, but there’s more to it than that. HuffPost published an excellent article on what women really mean when they say things like “all men are scum.”

The reason why women believing “men are trash” are in the millions is because they are mainly referring to toxic masculinity, male privilege, and upholding old-fashioned patriarchal concepts. So technically, men are not trash simply because they were born a boy, but because of all of the trappings of what being male often includes.

I personally suspect it’s the guys supporting #NotAllMen and MGTOW that report these often sarcastic comments. Once reported, Facebook will decide if it’s offensive by matching it to its hate speech guidelines and will see that it’s “directly attacking a gender.” The “offender” will most likely face a ban from the platform ranging from 24 hours to a week.

Facebook has been known to allow offensive memes, jokes, and groups to stay on its platform, even if they violate their community guidelines. If a user finds any of these offensive, they have the option to block the content so they won’t see it again. However, it still has the potential to circulate on Facebook.

TNW reached out to Facebook for a comment but the company didn’t respond (this article will be updated if it does). However, earlier this year a Facebook spokesperson told the Telegraph: “We understand how important it is for victims of harassment to be able to share their stories and for people to express anger and opinions about harassment — we allow those discussions on Facebook. We draw the line when people attack others simply on the basis of their gender.”

But Facebook Jailed proves the tech giant has double standards with its sexist censorship. It found users posting threats of lynching, personal attacks on women, and posts stating “women are scum” have all escaped the Facebook community ban.

Not shocking, @facebook has no problem with insulting women @DMandicino pic.twitter.com/KHm15AZwpT

Avery shared with TNW that she spoke with two employees from Facebook earlier this year about her site. “They wanted to explain their ‘community standards’ to us, since then they have directly contradicted the information they told me during that phone conference.”

Every time Facebook’s representatives gave an example of what was allowed or not allowed, Avery had proof of the opposite happening on the platform to challenge them with.

“At the time of the conference, they claimed to use my website as a helpful tool to check what they were doing wrong, needed to do better on, and fix their moderation mistakes.”

“Facebook published their newly written community standards earlier this year and they have automated removing any post that contains ‘men are scum/trash/worst/etc.’ The fastest a post has been removed is within three minutes and most get removed within 24 hours,” Avery added.

Statements like “men are trash” or “ugh, white people” are not hate speech, since reverse racism or sexism doesn’t exist. To put it plainly, “men are trash” doesn’t equally match sexist attacks against women because men don’t face the systemic oppression that makes sexist slurs so toxic.

Facebook acting as if statements like “men are trash” are on the same level as sexism women face daily proves that Facebook just doesn’t understand sexism — which is bad news for its two billion users.

Read next: EU must regulate cryptocurrency to rein in fraud and money laundering