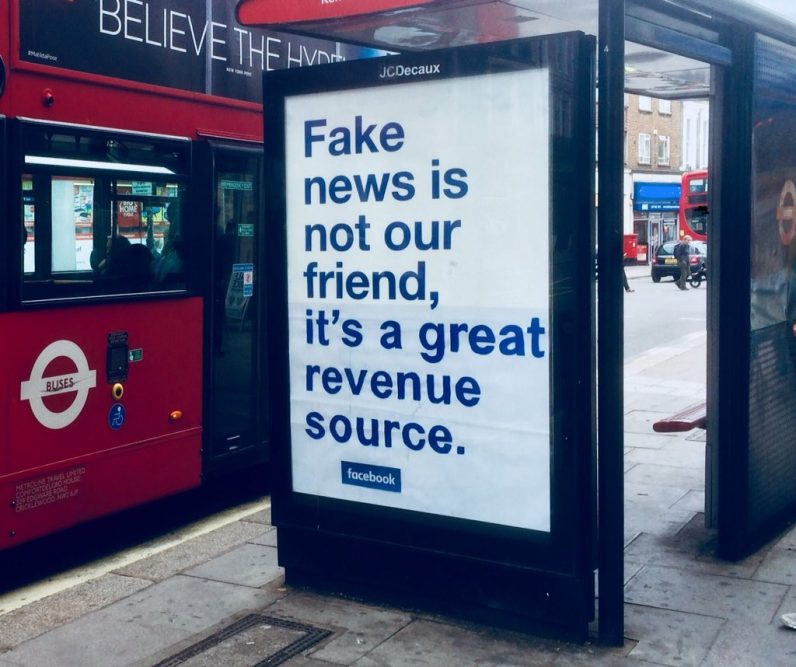 Facebook, bruised by the Cambridge Analytica scandal and fifteen years of unmitigated dickery, is currently in the process of trying to rehabilitate its image.

As the saying goes, you can’t polish a turd, but god knows Zuckerberg is willing to try. In the UK, Facebook’s weapon of choice in its crisis comms war is an advertising blitz previously unheard of from a social network, which has seen it spend millions across TV, digital, and street adverts.

Right now, you can’t walk down the street without being confronted with a big bus stop advert from Facebook, talking about how it’s unfriended fake news and data misuse.

For many, these platitudes ring hollow, as Facebook turned a blind eye to abuses on its platform for years, and only stopped when it became bad publicity. Without the mountains of criticism and bad press it’s endured, I doubt Facebook would have been moved to remove the bad actors that infest it.

Which is why I’m so grateful to the enterprising (and, dare I say, heroic) vandal who saw fit to “improve” some of Facebook’s bus stop adverts in London. With a bit of paper and sellotape, the artist known as Protest Stencil has made Zuckerberg’s adverts 100 percent more truthful.

A street artist has been improving Facebook billboards across London.

The best comedy is rooted in truth, and what makes Protest Stencil’s adverts so effective is that nobody — literally nobody — buys what Facebook is selling.

Facebook only addressed the flood of hyper-partisan fake news after Buzzfeed published its breathtaking investigation into the advertising-funded content factories in Macedonia. By that point, the horse had truly bolted the stable.

And in doing so, it’s inadvertently neutered the ability of legitimate publishers to use Facebook to engage with its audience, and make money. Across the board, engagement on Facebook pages is in the toilet, and it’s ultimately hurting revenue for already cash-strapped publishers.

Zuckerberg himself has reportedly said that he “doesn’t care” about publishers, adding that if they refused to work with Facebook, he’ll be “holding your hands with your dying business like in a hospice.”

Facebook would like the world to think that it’s changed. It desperately wants to rehabilitate its image, and return to the pre-2016 status quo, where it didn’t look so sinister. Where Zuckerberg was just an ambitious nerd, and wasn’t responsible for the most horrendous, rights-abusing administration in modern American history.

But that ship has sailed. We now know the kind of organization Facebook is. At best, Zuckerberg is either regarded as the epitome of hubris, or at worst, dangerously negligent, with little concern for what his company is doing for democracy and the world.

And no amount of bus stop advertising can change that.