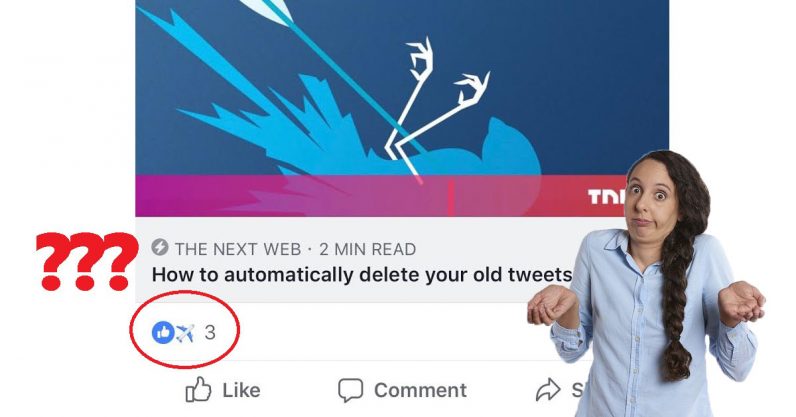 You might have noticed an addition to Facebook‘s menu of reactions yesterday: A tiny airplane. This unidentified flying object disappeared as quickly as it appeared, but that didn’t stop users from undertaking some pretty weird — and utterly pointless — rituals to get it.

You can plane react on Facebook for some reason pic.twitter.com/7VQ9A2ryZ7

The reaction was obviously not intended for prime time. It appeared as an extra “angry” emote in the reaction bar — the plane wouldn’t show for some until you selected the angry face, as seen in this video — and some users reported having to do some pretty arcane rituals in order to even see it.

Facebook quickly shot down any hopes this would be sticking around. A spokesperson told TNW, “This was created as part of an employee hackathon and wasn’t cleared for takeoff. Our apologies.”

But Facebook users were very taken with the emote.

Since the reaction was not available to everyone, naturally people took to the internet to find out how they could get it. And here we see how easy it is for misinformation to spread on Facebook. There are already multiple pages telling users how they can get the airplane, and keep in mind it was only available for a matter of hours.

The largest I can find currently has over 32,000 likes, and is titled “#AddPlaneReact.” Posts on the page tell users they need to post the titular hashtag in order to access the emote, or one of several variations. Given Facebook has since admitted the emote was never intended to be on the site, there’s no reason to believe a hashtag can trigger its appearance. But a lot of users clearly fell for it, as there are tens of thousands of comments with the hashtag in them.

Other sites provided step-by-step guides with everything from updating your app to clearing your cache. People are still trying these methods at time of writing if the timestamps on the #addplanereact comments are anything to go by. A source familiar with the matter told TNW the company has no intention of rolling the plane out to the public, but clearly hope springs eternal.

Even if we got it back, I’m not sure what we’d use the plane for. Facebook‘s other reactions are fairly easy to understand. If someone throws you a heart or a thumbs up, you know what they’re trying to get across to you. But what in the blue hell is an airplane intended to convey?

Read next: Everything you need to know about Reddit's recent security 'incident'