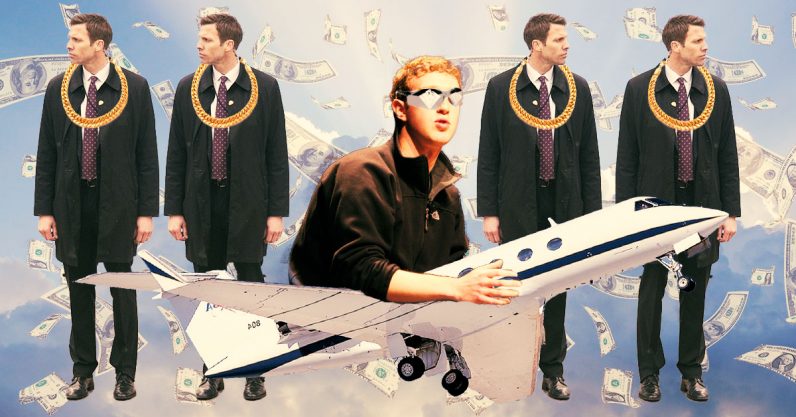 The social network yesterday filed a report with the SEC, which disclosed CEO Mark Zuckerberg’s security allowance. All those extra trips to testify in front of Congress this year must have taken their toll, because he’s now allotted $10 million. That’s a significant increase over last year’s budgeted $7.3 million.

Zuckerberg may be a billionaire, but he doesn’t pay his own private jet expenses. The filing, which you can read here, indicates the $10 million allowance is to:

… cover the costs of security personnel for his protection; the procurement, installation, and maintenance of certain required security measures for his residences; and the usage of private aircraft for personal travel.

It may seem like a lot, but considering his annual salary at Facebook is a whopping one dollar, and he receives no incentives or bonuses… it’s still a lot of money. But, keep in mind that the 34-year-old CEO just lost $15.4 billion in one day – he’s only worth $65 billion now. For the love of likes, somebody start a GoFundMe already.

You may be thinking that, since Amazon CEO Jeff Bezos is the richest man in the world, sometimes, his company must be spending the equivalent of the US defense budget keeping him safe – if you are, you’re dead wrong. According to a report from Fortune, Amazon spent $1.6 million on his security.

Here are some CEOs who have to make their security allowances stretch even further than Bezos:

Unlike Zuckerberg though, Bezos took home a salary of $81,840, so it all makes sense if you ignore the math. Besides, whether spending two million or ten, neither company comes close to the amount the taxpayers spend on billionaire President Donald Trump: $120 million.

Read next: Are people dumb? Or is the world just hard?