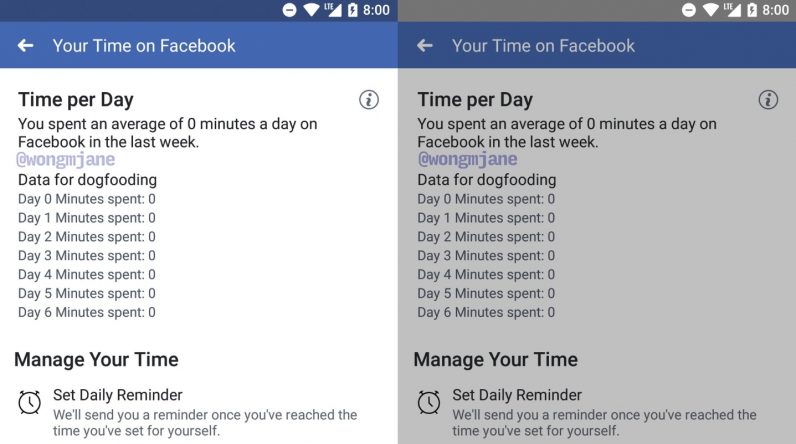 The discovery comes courtesy of developer Jane Manchun Wong. She found code in Facebook’s Android app for a feature called “Your Time on Facebook,” as first reported by TechCrunch. Facebook has since confirmed the feature is in active development, saying “We’re always working on new ways to help make sure people’s time on Facebook is well spent.”

Instagram is also working on helping users to improve their digital wellbeing: https://t.co/y38mV3RtqB

The tool lists how much time you spent on Facebook in the past week, and your average per day. You can even set a time limit for your usage and have quick access to changing notification settings.

“Time well spent” and “digital wellbeing” are the latest buzzwords in the tech world, but for once, they’re actually important. With everyone from Google to Apple trying to help you spend less time on social media, it’s nice to see Facebook itself having a go at it.

While it’s easy to construe this as a PR response to the Cambridge Analytica scandal, Mark Zuckerberg has long been saying that he wants people’s time on Facebook to be more meaningful. In a January post about changes to the News Feed he wrote:

I’m changing the goal I give our product teams from focusing on helping you find relevant content to helping you have more meaningful social interactions.

As we roll this out, you’ll see less public content like posts from businesses, brands, and media. And the public content you see more will be held to the same standard — it should encourage meaningful interactions between people.

Later that month, he even bragged to shareholders about people spending less time on the platform – and to expect that time to decrease further.

There’s no word on when this feature will actually come to light, but at this point it’s only a matter of time.