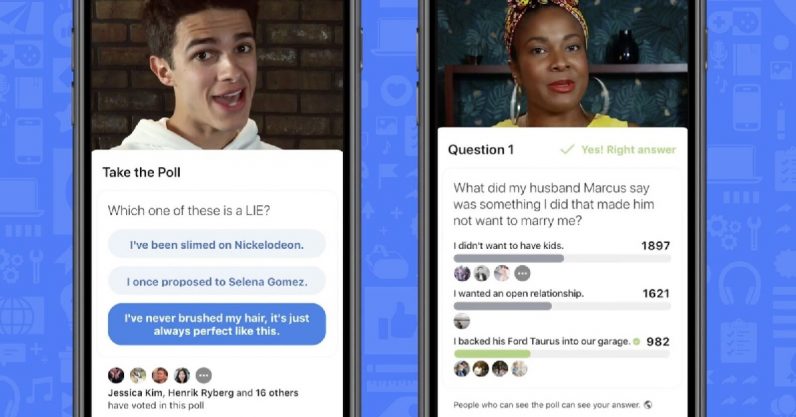 The two major updates to Live with Faceboook are polling and gamification, both of which make videos more interactive. Polling is just what it sounds like: video hosts ask viewers to vote and give their opinion on a variety of different topics. It’s available for both live and on-demand video. The first Facebook show to put this into action is Help Us Get Married, which tasked viewers with voting on different wedding options.

Gamification basically turns the video into a live game show, in the style of HQ Trivia — as you might guess, it’s only available on Facebook Live. The video creator gives the audience a series of questions for which there’s only one correct answer, and participants are eliminated if they give the wrong answer. Facebook also revealed a number of game shows are in the works thanks to gamification.

In addition to features that make video better for the audience, Facebook’s also trying to make it better for the content creators. The final facet of this update is a suite of new monetization options to help the people making the videos profit from their work.

For starters, Facebook is enabling ad breaks for more creators. It’s also expanding its test on fan subscriptions, which allow people to pay $4.99 to the content creator in exchange for a badge and a few other perks. It’s also rolling out the Brand Collabs Manager, which allows brands to search for video stars with whom they wish to partner. The feature has been tested for a limited time, and was leaked earlier this year.

The new updates come just in time for VidCon, the annual conference for online video creators which begins tomorrow. The space has traditionally been dominated by YouTubers — it was started by the Greens of Vlogbrothers fame. Facebook has been trying to break into the game with new features such as those mentioned above, and is hosting multiple panels at this year’s VidCon.

Read next: Adobe's Project Rush is a new all-in-one app for video creators