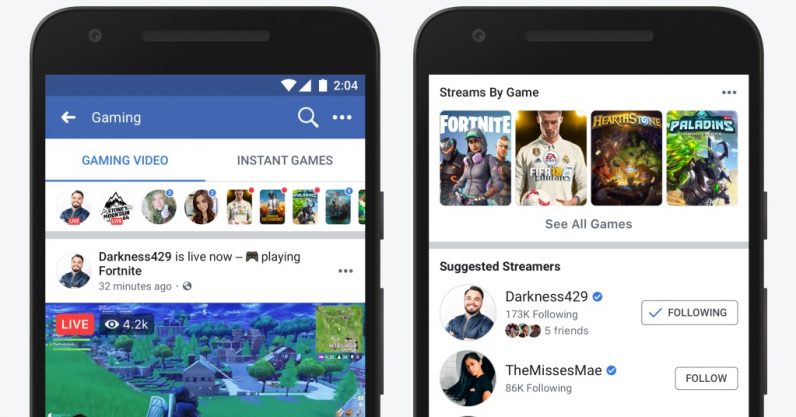 Facebook has launched a new page specifically to attract video game streamers and viewers. In a world where Twitch, Mixer, and YouTube Gaming are already fighting for dominance on that market, Facebook would have to make up a lot of ground to be in the running.

What it is: Facebook is building its own dedicated gaming dashboard called fb.gg, which gives game streamers their own page and access to a program which helps them monetize their content. If streamers join the Level Up program — which sounds a lot like Twitch’s affiliate program — they’ll have access to early release of new features. Their viewers will also be able to send them virtual currency as tips.

If you visit the page, you’ll see Fortnite and PlayerUnknown’s Battlegrounds have the most streams and viewers at the moment — no surprises there. It’s a simplistic layout, with options for finding streams by game, or to follow suggested streamers and little else. According to Facebook’s press release, it’s a starter page with more stuff to be filled in later.

Why it matters: The obvious question when you see this (at least in my case) is “Why?” Why is Facebook trying to branch into territory currently dominated by Twitch and, to a lesser extent, YouTube and Mixer?

Ordinarily, I’d answer that it’s just Facebook being Facebook, trying to stick its cobalt-blue finger in every pie. But if its history with Snapchat is anything to go by, Facebook isn’t shy about trying to capitalize on what’s popular with teenagers — and Fortnite is currently cleaning house and then some.

With reports currently circulating that teens have vastly lost interest in Facebook — it’s trailing Snapchat and YouTube by a massive margin — Facebook needs to do something to try and reel back in that audience. Given a recent poll published by the Washington Post suggests the majority of teenagers watch esports at least casually, it makes sense those are the streamers Facebook would cater to the hardest.

Read next: A bunch of 'art bots' got swept up in Twitter's political crackdown