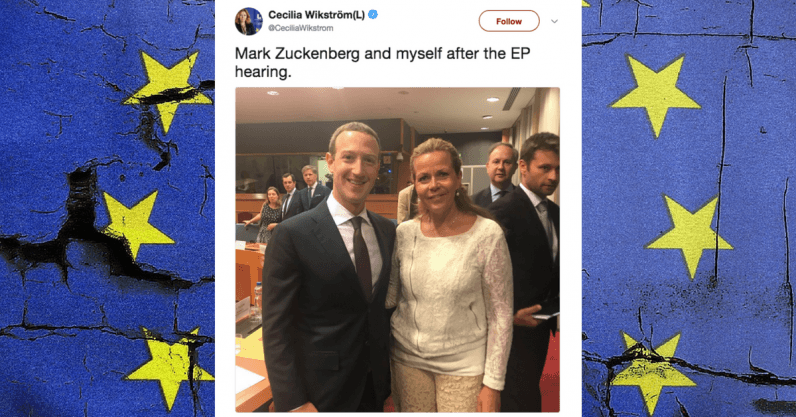 Mark Zuckerberg’s hearing in front of EU parliamentary members was somewhat disappointing. Many had hoped for some straight answers from Facebook’s CEO. However, due to the odd format of the hearing, Zuckerberg was able to dodge most questions and got away with reiterating Facebook’s recent talking points.

Despite the fact that even some of the politicians that took part in the hearing were outraged by its pointlessness — it didn’t stop Swedish MEP Cecilia Wikström to grab the chance to get a selfie with the controversial CEO.

Mark Zuckenberg and myself after the EP hearing. pic.twitter.com/7zeCrE1lPW

It seems that the weird looks of the people in the background were a bad omen, because Twitter users did not appreciate Wikström’s lit social media game. As of writing this story, her tweet had only 42 retweets and 139 likes, compared to a whopping 534 replies. The lopsided ratio is a clear example of what is referred to as ‘ratioing‘ which usually indicates critical negative response to a tweet. Basically, the more replies a tweet gets over retweets and likes, the worse it is for the original Tweeter.

So it was you who 🏃‍♀️rushed to Zuckerberg with phone for 🤳selfie. While your colleagues were ashamed for such wasted meeting.🙄👎 pic.twitter.com/HOWBu7j9b5

Wikström’s ratio currently stands at roughly 3:1 — which is bad considering that 2:1 is thought of as a worrying number — and the replies match the ratio:

We’d rather have heard critical questions instead of being confronted with this picture. You had one chance to do your job. You didn’t.

You’re not at a Beyonce-concert, you were supposed to ask someone who probably broke a whole bunch of European laws un-biased questions.

It seems that the Beyoncé comment is where Wikström drew the line. Rianne Meijer, who wrote the reply, tweeted screenshots that showed Wikström had blocked her account along with the caption “Representative of the people 👌.”

To make matters even worse, a keen Twitter user pointed out that Wikström tagged a fake account in her tweet, instead of Mark Zuckerberg’s official account. Under normal circumstances, this could easily be seen as an honest mistake, but in this particular context it raises the question of politicians’ tech literacy.

Wikström’s social media blunder pales in comparison to the lost potential of the EU hearing, but its bizarreness makes it a fitting cherry on top of a disappointing sundae.

Read next: IBM combines AI and blockchain to turn your phone into a counterfeit detector