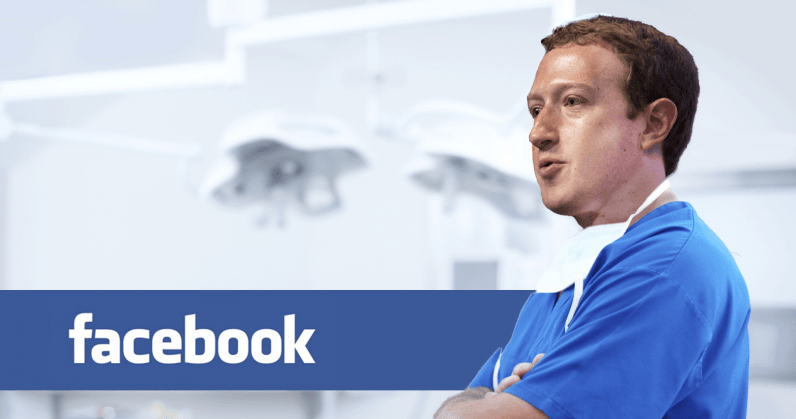 Facebook has been in recent talks with several high profile US hospitals in an attempt to glean anonymized patient data for a now-defunct project. The company aimed to collect obscured personal details — including illness and prescription info — in an attempt to match it with user data it collected by the social network. The goal, reportedly, was to help hospitals figure out which patients might need special care or treatment, according to CNBC.

The news comes amid growing concerns that the social network isn’t taking the steps needed to secure its users from over-zealous third parties — and often from Facebook itself.

For some, the knowledge that Facebook planned to anonymize this data will be enough. Others will undoubtedly question whether a plan that sought to obtain obscured patient data to couple with information it already collects would be enough to protect their anonymity.

Just yesterday CEO Mark Zuckerberg hosted a live Q&A session with reporters where he revealed, among other things, that the company had unknowingly allowed Cambridge Analytica — a data insights firm — to collect user information on some 87 million users, a majority of which didn’t install or consent to the app that scraped their profiles. Worse, he later revealed that all 2.2 billion users should operate under the assumption that their data had been scraped on the social network at some point or another.

For now though, the project appears to have been back burnered while the company attempts to navigate the fallout of a string of recent scandals.

The medical industry has long understood that there are general health benefits to having a close-knit circle of family and friends. But deeper research into this link is needed to help medical professionals develop specific treatment and intervention plans that take social connection into account.

With this in mind, last year Facebook began discussions with leading medical institutions, including the American College of Cardiology and the Stanford University School of Medicine, to explore whether scientific research using anonymized Facebook data could help the medical community advance our understanding in this area. This work has not progressed past the planning phase, and we have not received, shared, or analyzed anyone’s data.

Last month we decided that we should pause these discussions so we can focus on other important work, including doing a better job of protecting people’s data and being clearer with them about how that data is used in our products and services.

Questions remain on why Facebook would need this data in the first place.

If Apple’s newfound interest in monitoring health and tracking fitness is the goal, there’s an important distinction to be made: Apple stores all of this information on the device, not in the cloud. It’s not accessible to anyone at Apple, or third-parties that find loopholes in an API.

According to Interim CEO of the American College of Cardiology, Cathleen C. Gates, the project was an effort to improve health by researching ways social media can aid in the prevention of heart disease. She told TNW:

It is well-known that many things factor into a person’s heart health—from genetics to lifestyle to the quality of their medical care. For the first time in history, people are sharing information about themselves online in ways that may help determine how to improve their health. As part of its mission to transform cardiovascular care and improve heart health, the American College of Cardiology has been engaged in discussions with Facebook around the use of anonymized Facebook data, coupled with anonymized ACC data, to further scientific research on the ways social media can aid in the prevention and treatment of heart disease—the #1 cause of death in the world. This partnership is in the very early phases as we work on both sides to ensure privacy, transparency and scientific rigor. No data has been shared between any parties.

Medical professionals have, for decades, understood the link between general health and those with close-knit groups of friends and family members. A source at Facebook who is familiar with the project told TNW that it was an attempt to better understand the ties between this level of social connectedness and general health in an attempt for doctors to better develop intervention options or treatment plans for their patients. Still, you have to wonder what Facebook hoped to find outside of what we already know on a topic that has been researched ad nauseam.

Furthermore, would anyone willingly hand over this level of access to a company that’s already won the war for your mind?

Read next: Snapdragon-powered Windows PCs are getting 64-bit app support