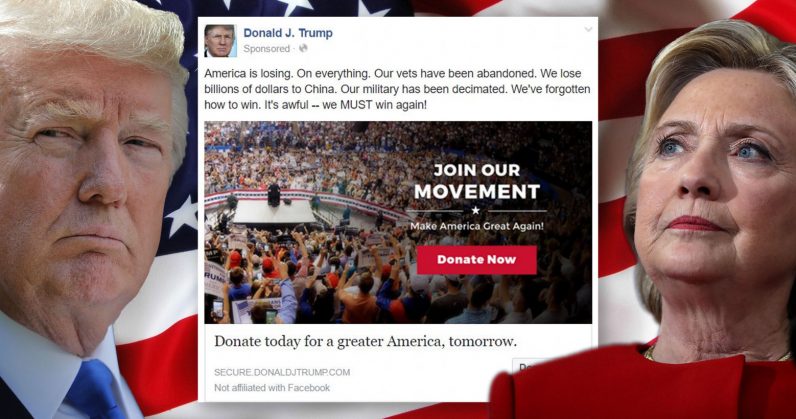 A recently unearthed document from Facebook shows that Donald Trump’s team outperformed Hillary Clinton’s in nearly every meaningful metric on its ad network during the 2016 election. Trump has often bragged of hiring the best people — a claim the White House turnover rate would seem to debunk — but this time, Facebook’s own data scientists agree: Trump did have the superior team.

Or, maybe it’s the Cambridge Analytica effect. But that’s a story for a different day.

First uncovered by Bloomberg, the paper details a heavy-handed approach to Facebook ads by both candidates. Between June and November 2016, Trump spent over $44 million on the social network with Clinton trailing at $28 million. Clinton, it should be said, had such a dominant lead in the polls many assumed the race was all but over.

Aside from the differential in ad spend, Trump’s team appeared to be the more sophisticated of the two in how it made use of Facebook’s outcome-oriented approach to optimization. All told, Trump ran 5.9 million ad variations, rapidly testing, tweaking, and killing non-performers — while increasing spend amounts on those that led to the desired outcome.

Clinton ran around 66,000 ads during the same time period.

Trump also made use of a feature that creates lookalike audiences based on current supporters. Put simply, Facebook’s data insights gleaned information from each supporter in an attempt to find others just like them — these “others” would be new targets, those who weren’t already following Trump or interacting with his Facebook messages.

Clinton took a different approach. Her campaign cast a wide net attempting to ensure the candidate had wide appeal. Trump’s campaign was spearfishing; Clinton’s was dropping a massive net in hopes of catching everything.

It’s unclear how Cambridge Analytica’s voter profiles figure into this equation on the Trump side. We do know, however, the data broker manufactured profiles for some 50 million people in an attempt to better target audiences who may side with Trump on key issues.

As we said in a previous piece:

As best as we can tell, the strong Facebook push helped Trump to win key states like Wisconsin, which ultimately won him the election. That said, it’s unclear how much of this can be attributed to Cambridge Analytica. We can say, with complete confidence, that it certainly didn’t hurt.

And lastly, Trump’s campaign was better at calling users to action than Clinton’s. 84 percent of Trump’s ad budget involved a call-to-action, such as donating, liking, or sharing a post. Clinton used the tactic just over half the time (56 percent).