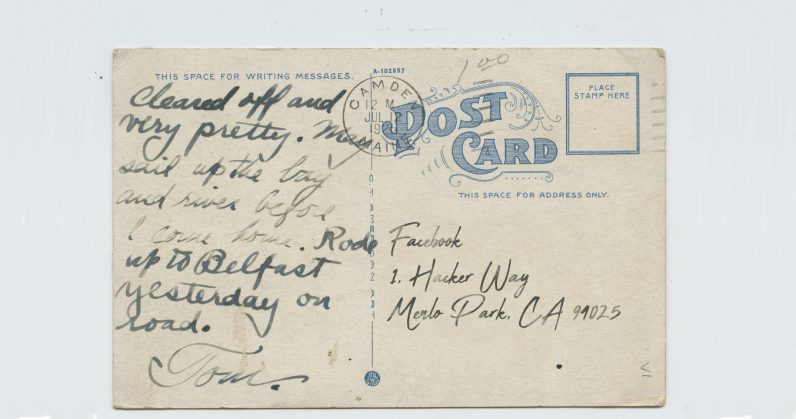 In an effort to prevent foreign actors from surreptitiously manipulating audiences with ads concerning US elections, Facebook will send postcards in the mail to verify advertisers’ presence in the country, reports Reuters.

Katie Harbath, Facebook’s global director of policy programs, said that the plan will go into effect before the Congressional midterm elections in November. The idea is that if your ad mentions a candidate in the running, you’ll receive a postcard sent to your address stateside with a code that you’ll have to authenticate with.

That’s an interesting choice for a security practice to prevent election funding by foreign nationals, which is illegal in the US.

The decision to send out postcards like people did back in the 1800s comes after US Special Counsel Robert Mueller charged 13 Russians and three Russian entities for using social media to meddle with the last presidential election in the country and boosting President Trump’s chances of winning.

Will it work? Harbath says it won’t solve everything. I’m inclined to agree; it doesn’t seem like it’d be awfully difficult to scam this system. However, for what it’s worth, it’s a sign that Facebook recognizes how its social network can be exploited to sway public opinion by foreign entities – which is more than it cared to admit when it faced Congress last month.

Read next: 9 proven strategies to improve your small business’ sales on a tight budget