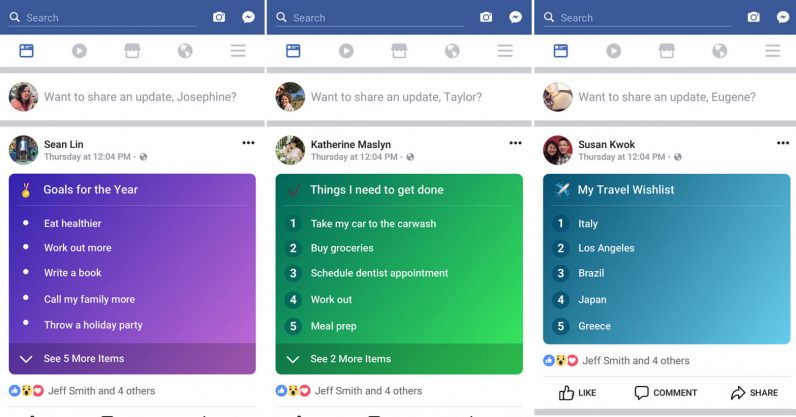 That’s now changing. Back in January, our social media guru Matt Navarra spotted a feature that allowed you to create lists with a similar set of gradient backgrounds to status posts. The lists show up as an option when you create a new status, and can be in either numbered or bullet-point form.

Although it was only a test at the time, TechCrunch reports the feature will begin a slow global rollout today.

Facebook seems to be trying to deliver on its recent promise of making the social network a bit more personal; it wants you share more about you and less outside content. They also seem to be designed to be shared with friends, the way people often list their favorite movies/foods/whatever and ask friends to comment with their own.

The possibilities are endless.

Some have already questioned whether the company has ulterior motives in implementing lists; they could theoretically provide easy data about your interests that advertisers could use. Facebook’s Adam Mosseri, Head of News Feed, says the feature was simply a response to use cases he was already seeing.

Actually we built lists because we saw lots of people creating lists as long statuses and with pictures, and thought it would be good to make it easier for people to create lists first class. I hope we can get to a point, someday, where you don't always assume ill intent.

Granted, creating lists might not be the most pressing issue Facebook has to deal with, but I do see people share lists regularly on my own feed. I also think making the New Feed more personal is a step in the right direction if the company honestly wants to move away from being a news source and more about encouraging interaction with friends.. But I’m biased – I love lists.

Whatever the motivation, I expect people are going to use these a lot. We’re not seeing it yet on any of our own devices – it is indeed a slow rollout – but it’s just a matter of time now.