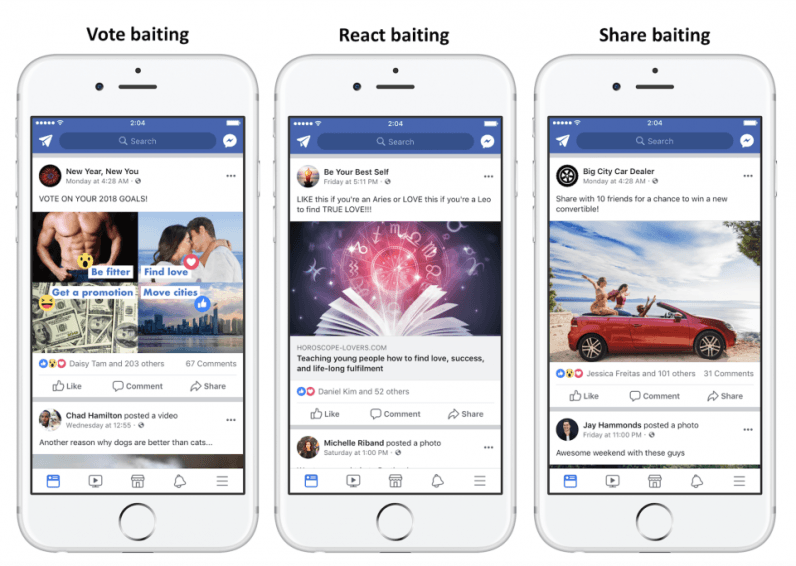 Facebook is cracking down on “engagement bait.” Even if you’re unfamiliar with the term (it’s nowhere near as ubiquitous as the now-meaningless “clickbait”), you’ve probably seen an “engagement bait-y” post in your timeline. They use phrases like:

Moving forward, Facebook will downrank these posts in the News Feed, meaning fewer people will see them. The Facebook News Feed doesn’t list posts in a chronological order. Rather, it’s curated by an algorithm, which Facebook says filters out content it perceives as “low quality.”

The move creates consequences for pages that repeatedly use this tactic. That’s because engagement bait is a pretty solid signifier of low-quality content. If you have to resort to these tactics in order to promote your page or blog, it’s likely it isn’t strong enough to attract people on its own merits.

In addition to downranking individual posts, Facebook says that pages that continually use engagement bait tactics will be penalized.

In a blog post, a Facebook spokesperson said “over the coming weeks, we will begin implementing stricter demotions for Pages that systematically and repeatedly use engagement bait to artificially gain reach in News Feed.”

The social giant is eager to stress that individuals who may write engagement bait-y posts for personal reasons — like raising money, or asking for personal recommendations — won’t be impacted by this. The issue isn’t people targeting their immediate personal network, but rather pages that can be viewed by the entire Facebook community.

Engagement bait is an incredibly effective growth-hacking technique. Perhaps the best-known example of a page using it to great success is Britain First — a once-obscure far-right British political party who quickly came to boast the most followed Facebook page in UK politics, largely thanks to its use of Facebook.

It quickly reached over a million followers thanks to its post, which typically contained populist rhetoric in all-caps, and usually contained some permutation of the words “SHARE IF YOU AGREE.”

This isn’t the first time Facebook has cracked down on a popular trope. In 2013, the company began a major crackdown on clickbait titles, which is an effort that continues to this day.

If you were on Facebook back then, you almost certainly saw an article in your News Feed with a title like “This amazing kid got to enjoy 19 awesome years on this Planet. What he left behind is wondtacular,”or “Mitt Romney Accidentally Confronts A Gay Veteran; Awesomeness Ensues.”

They were annoying, because often, you actually did click through — even if you wouldn’t admit it publicly. They piqued your attention, and sites like Upworthy, Distraftify, and Elite Daily all saw major growth thanks to these tactics. You’ll never guess what happened next, though.

After the crackdown, traffic to these sites largely evaporated. According to Business Insider, Upworthy saw a 46-percent slump in visits in the two months after Facebook tweaked its algorithm.

Facebook says it wants to ensure authenticity on the News Feed, and stop people gaming the system. People dislike engagement bait posts, just as much as they disliked Upworthy’s teasing headlines, back in the day.

The difference between now and 2013 is that people have more options. Instagram, Snapchat, and Twitter are all viable alternatives to Facebook. The ironic thing is that Facebook is just as desperate for engagement as the pages it takes issue with. The difference is that here, Facebook is the one pulling the strings.

Read next: 4-step guide to evaluating the mad world of ICOs