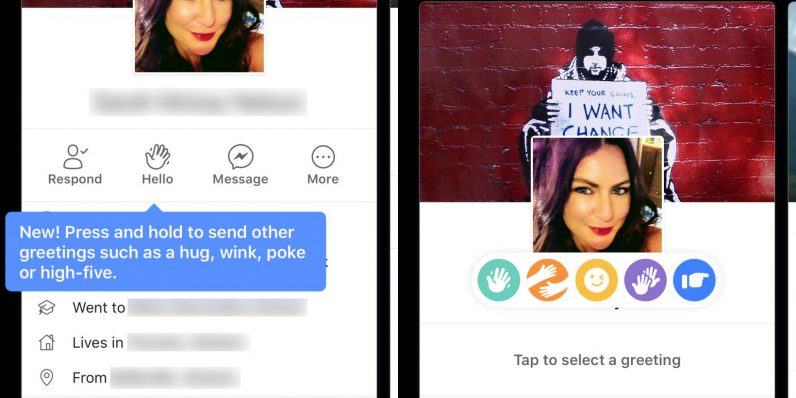 Our own director of social media spotted a curious new feature on Facebook last night: a row of ‘Greetings’ buttons beneath a user’s display picture on their profile page. It’s about as bad as you imagine – almost like the return of the SuperPoke from a decade ago.

Essentially, the social network is now adding a bunch of variations to the ‘Hello’ greeting it quietly introduced last month for some users. In addition to saying ‘Hello’, you can now send a hug, wink, poke or high-five. These options become available when you hold the ‘Hello’ button, similar to how the additional Reactions work with the Like button. I don’t know about you, but I’m certainly not prepared to receive winks from people I haven’t spoken to in years.

When you click the notification alerting you of an incoming Greeting, you’ll be taken to the sender’s profile page, where you can choose to lure them into an endless Greeting loop, by responding. It never needs to end!

Now, I don’t mean to sound like a cynic, but it looks like Facebook is trying to bring back a feature that became more of an annoyance than a delight to use. Pokes may have had some novelty value back in the day, but now that there are so many different ways to interact with people through social channels, this just feels like it’ll add to the notification noise we’re already tired of.

I’m hoping that this feature will simply perish in the test lab instead of going live across the platform. We’ve already got plenty of unwanted interactions to deal with, courtesy of Facebook.

Read next: Removing Bitcoin payments from Steam is a smart move by Valve