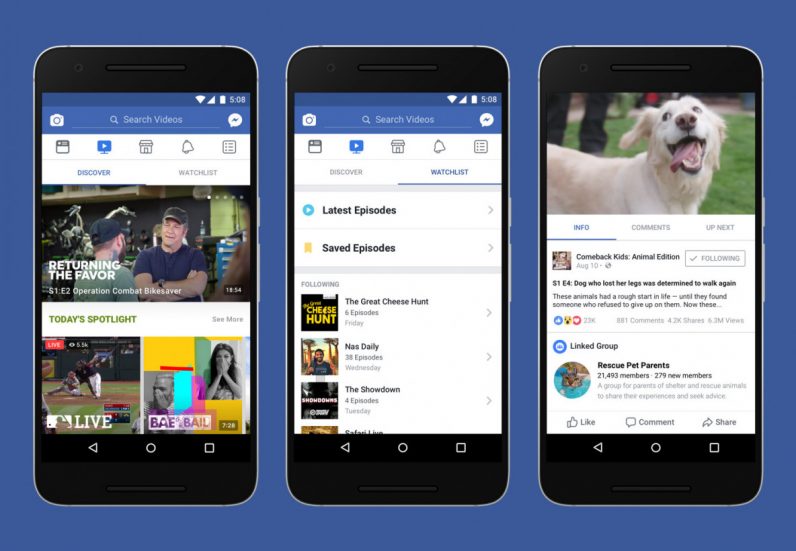 After launching its episodic video streaming service in the US in August, Facebook is gearing up to bring Watch to India sometime between January and March next year, reports The Ken.

The service includes shows that span lifestyle, comedy and children’s entertainment content, as well as live sports events. Still in its early days, it’s open to a small pool of creators and viewers on the platform, and can be found in a ‘video’ tab in Facebook’s mobile, desktop and TV apps; each show also gets its own Page that fans can follow for updates.

The move could help propel Watch skyward, as India has more Facebook users than any other country on the planet; in July, the social network was reported to have 241 million users there, while the US trailed behind with 240 million.

What’s more, India has a large English-speaking population, as well as large swathes among its nearly 400 million internet users who are comfortable using smartphones to watch video. And back in March, Financial Express estimated that the nascent domestic streaming video market would be worth $272 million this year.

Add in low costs for mobile data (arguably the cheapest in the world), and you have a recipe for a prime opportunity for Facebook to jump onto.

The company can already target users precisely on its platform with plenty of data points concerning demographics and interests, and its mobile app plays video automatically as you scroll through your feed – complete with mid-roll ads and an option to download clips so you can watch them later, offline, or when you no longer have access to a cheap or free Wi-Fi connection.

The Ken notes that creators hope Watch will be able to solve a problem that they’re presently running into on YouTube: discoverability. They believe that the Watch video tab will be a better place to showcase their content, as opposed to depending on YouTube’s algorithmic recommendation system. But it sounds like that will only work as long as the roster of shows remains short.

In addition to making Watch available to viewers in India, the company is also looking at sourcing regional-language content – a must-have for any video platform worth its salt in the country. Every service, from Hotstar to Amazon Prime Video to Netflix already offer movies and shows in various Indian languages.

Facebook is also courting independent producers with its new Creator app, which helps them enhance their live videos with professional graphics and deep analytics. It’ll be interesting to see if that dovetails into the company’s approach towards bringing more content onto its platform as it explores the Indian market.

Read next: 12 apps that show you how you’re wasting time — and help you make better use of it