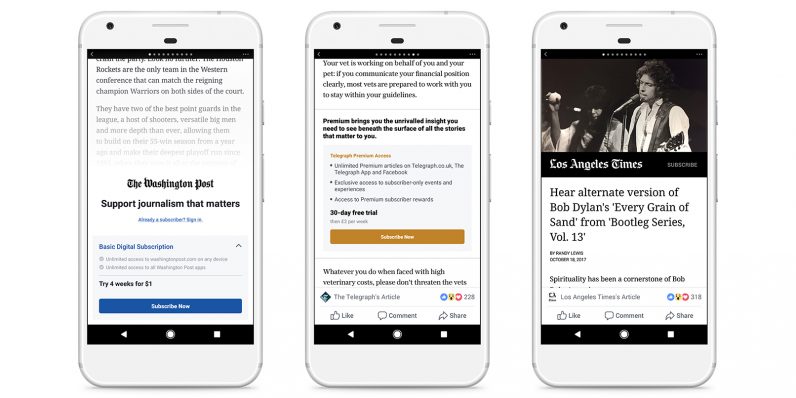 Given that more people than ever before are getting their news from social media, it makes sense that Facebook wants to help publishers by introducing subscriptions for content on its platform. And it’s starting on mobile.

The company announced today that it’s rolling out paywalls for Instant Articles on Android over the next few weeks for a number of publications as part of a pilot program:

If you want to unlock content from these outlets, you’ll be able to do so through the links you come across on Facebook, and the transactions will take place on the publications’ sites. As such, they’ll also keep 100 percent of the revenue from these subscriptions.

You’ll be able to use your existing subscriptions for Instant Articles too. Facebook noted that it’ll allow for both premium and freemium models of paywalls for publishers, so they have the option to charge for certain articles only, or to ask you to pay up after you’ve crossed a certain number of free articles.

With that, Facebook is cementing its position as a media company. Sure, it’s not taking a cut from publishers just yet, but that’s presently a function of how this program is being tested and implemented first on mobile. It’s coming to Android first because Apple expects a 30 percent cut from in-app subscriptions on iOS – but it won’t be surprising to see the two companies make a deal of some sort in the future.

Read next: What all successful millennial entrepreneurs have in common