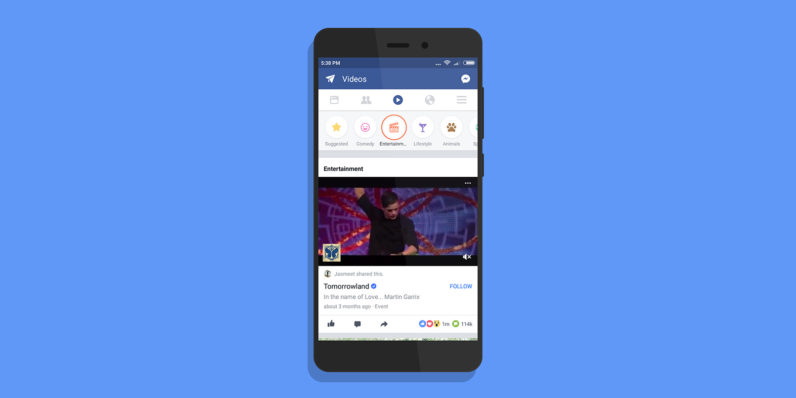 Facebook has been pushing video on its platform for quite a while now, but a revamped Videos tab in its mobile apps indicates that the company is hoping to draw even more eyeballs away from rival services like YouTube.

It’s part of a limited trial being conducted with users in India. I’ve only just spotted a new Video tab (marked with a ‘play’ icon in the app’s navigation bar) in the Android app; it features an endless stream of videos from your network – both from Pages you follow, as well as clips your friends have liked or shared. There’s also a bunch of buttons to surface videos from various categories like Entertainment, Comedy, Lifestyle, Animals, Sports and News.

When Facebook had first begun rolling out the Video tab on mobile back in April 2016, it was primarily bringing users Live videos. The shift to highlight clips that are being watched a lot seems like a recent development. Some other Android devices I tested didn’t have the Video tab at all, while one had the tab but not the categories bar.

The videos aren’t always the latest ones that have been uploaded to Facebook – some are as old as four months. But it looks like Facebook is following YouTube’s lead and attempting to present users with clips it thinks they’ll enjoy based on their browsing history and network within Facebook.

It’ll be interesting to see if the tab eventually adds other features to rival Google’s video platform, like viewing history and a chronological subscription feed. And Facebook has a lot to gain in boosting video on its apps: the company raked in just over $8 billion in revenue in Q1 2017, and the company’s seen earnings grow steadily over the past year with its ad properties, including video ads.