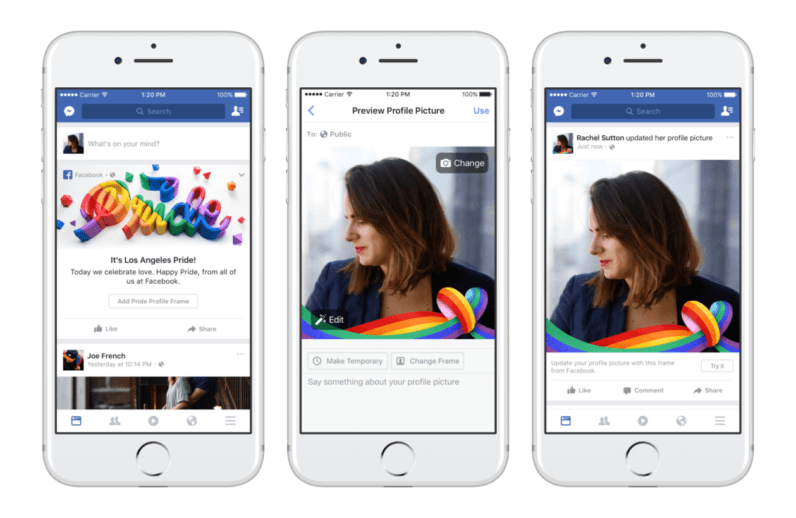 It’s Pride month, so Facebook is adding several new features to help you celebrate and support the LGBTQ community.

Of course, it wouldn’t be a Facebook celebration without some kind of profile photo frame. Throughout June, you’ll see a message atop your feed inviting you to add a frame (react to this message and you’ll get a little animated surprise). I’m a fan of the rainbow swish Facebook is using as a frame this time around.

That said, there doesn’t seem to be any way of manually enabling Facebook’s official frame at the moment – you’ll have to wait for the message to show up on your feed. You can go to Facebook’s frame selection tool and search for a Pride frame, but I’m not seeing the official Facebook one yet, only those submitted by the community. Still, there are plenty of alternatives to choose from.

There’s also now an extra reaction you can use to indicate your support (a rainbow flag, naturally) on posts and comments. We’ve seen Facebook use extra reactions previously, so it’s nice to see the company deploying it for pride.

Within the camera, you’ll find a variety of new masks and frames. Just tap on the magic wand to bring up the effects. Instagram and Messenger aren’t being left out either, each with their own set of stickers and effects. There’s a new rainbow brush I particularly like on Instagram.

All that being said, Facebook isn’t specifying how widely it’s rolling out the new Pride features. I imagine it’s limited to countries where the LGBTQ community has wide support, but we’ve contacted the company for clarification.

Read next: Twitter's new message requests feature is really annoying (but maybe you'll like it)