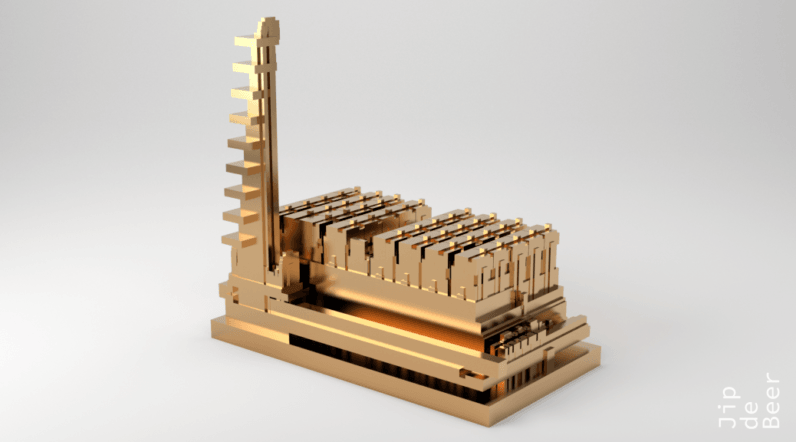 Jip de Beer has an interesting take on the structure of the internet pages we all know. Where we only see a flat surface on our screens, de Beer has been researching the three dimensional depth of homepages.

De Beer is a young artist who’s about to graduate from the Frank Mohr Institute in Groningen, The Netherlands. He’s fascinated by automation and attempts to optimize his artistic work(flow) with programming. His work usually involves a Web Browser and tends to be generative, interactive and strongly visual.

One of his latest projects is called Web Spaces. As you might or might not know, a webpage – much like the files on your computer – is structured in layers of hierarchy. Some elements of the page are ‘deeper down’ than others and de Beer sought to make this insightful for humans.

He developed a browser plug-in that colors different elements according to the depth in the hierarchy, revealing the three dimensional structure beneath. But he didn’t stop there. De Beer took the three dimensional maps of the ten most valuable domains online, and had them 3D printed and gold plated.

At a vegan restaurant where we were having lunch, he showed me several of his 3D printed and gold plated sites, and made me guess which one was which. I struggled to recognize Facebook, but my daughter (who was with me during the interview) saw it right away.

In my defense; the model was based on the ‘logged out’ state of Facebook. Something which my daughter is seeing more often on the public computers in her school than I ever do.

Now you’re probably wondering how these models of our favorite sites look. So here’s Facebook, in gold:

The other models he showed me were of Google – which thankfully I got right – Boing Boing, Twitter and Wetransfer. The 3D prints of the models are either gold plated, or printed in steel, aluminum, gold, titanium, silver or a combination of several of those materials.

Some objects are as small as sugar cubes, some are the size of an iPad mini.

He dragged along a suitcase, and slowly unpacked each model from a black cloth, as if it were a jewel. Which you could say they are, of course, since they’re all made from expensive materials and are one of a kind.

I asked de Beer to show some models on video, so here we go:

You can see more of his work on his own website: jipdebeer.media including a beautiful rendering of Wikipedia. According to him, it was electroplated with copper but something went wrong which caused corrosion, and made it look even more impressive.

Read next: Jeremy Burge (Emojipedia) on the huge amount of train emoji, peach butts and the future