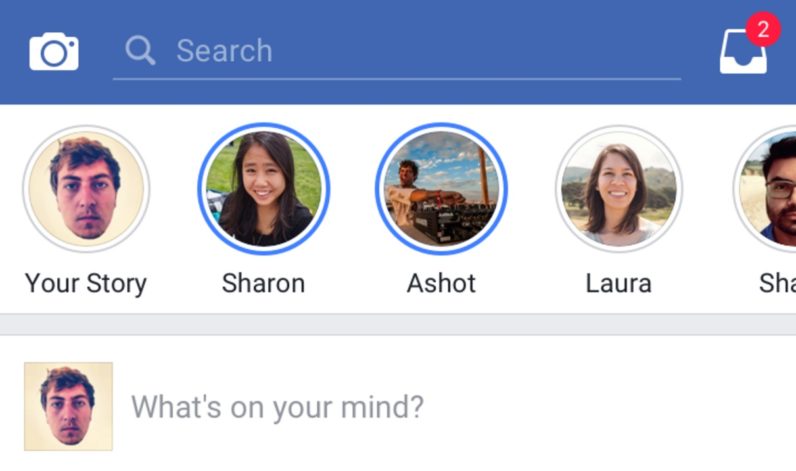 At long last, Facebook’s Snapchat-apeing saga is complete: Stories is now rolling out to everyone on Facebook proper, after landing on Instagram, WhatsApp, and Messenger over the past several months. Along with it comes a filter-tastic new in-app camera, as well as a direct messaging feature.

Today, we’re excited to introduce the new Facebook camera. We think it’ll give everyone more ways to express themselves and share what they’re up to. So from now on, you can just let your camera do the talking.

Stories has been on trial in a number of countries since at least January, so we have a fair idea of what to expect. Which is to say, it works exactly like on Instagram; Stories live above your News Feed for 24 hours, and can include both videos and images with a variety of filter effects. There’s even now a dedicated camera button on the top left of the app to serve as a constant reminder to post some goofy filtered-up photo.

But to Facebook, the filters are more than just trivial additions. People are sharing more visual content than ever, and these effects are a way to augment and provide context for the moments being shared on screen.  To my surprise, the company actually acknowledged Snapchat as the “pioneer” in the space during a press event, noting that its new push is ultimately a reflection of the visual nature of today’s communication.

It has a small team of artists creating the filters, and works to adapt the filters for each region so that they are relevant to everyone using them (such as using different slang text in different countries). It’s also partnering with various brands for themed filters, including Power Rangers, Minions, and Wonder Woman masks, and intends to introduce “new ways for the Facebook community to create their own frames and effects” in the coming months.

One area Facebook is a bit different from other apps is that you have the option to share Stories directly onto your Timeline and News Feed as well, giving them a bit more visibility by placing them among standard posts. You can also now share 24-hour media with only a few specific people via a ‘Direct’ feature.

On Instagram, at least, we know that Stories have been hugely successful. The company shared that over 150 million people were using the feature in January, just five months after it was introduced.

That might be because Instagram is arguably the most similar in nature to Snapchat, with its visual emphasis on quick sharing. Anecdotally, at least, the feature hasn’t been quite as popular on WhatsApp, where user’s have clamored for its removal.

We’ll have to wait and see how it does on Facebook proper. Stories are clearly a huge push for the company, and the fact that they live above your News Feed is remarkable, considering the latter has always been your main way of experiencing media on the social network.  After all, Facebook could have gone the WhatsApp route and kept the feature in a separate tab you could basically ignore. But it didn’t.

You might also be wondering: why can’t you just cross-post your stories all the apps at once? For now, Facebook says it wants to test out what works best on each app – there’s a reason Facebook proper is the last one to receive it. The company is considering cross-posting, but it’s waiting to see how it all plays out first.

That makes some sense. The more places you need to post stories onto, the more often you’re compelled to try out the feature in the long run. But I still feel bad for the social media gurus who will feel the need to post the same story to four separate apps (five, if you include Snapchat).

Whatever your take on Stories, it’s clear the format is here to stay. These new features should be rolling out to everyone on Facebook starting today.

Read next: This sci-fi short film turns augmented reality into a creepy psychothriller