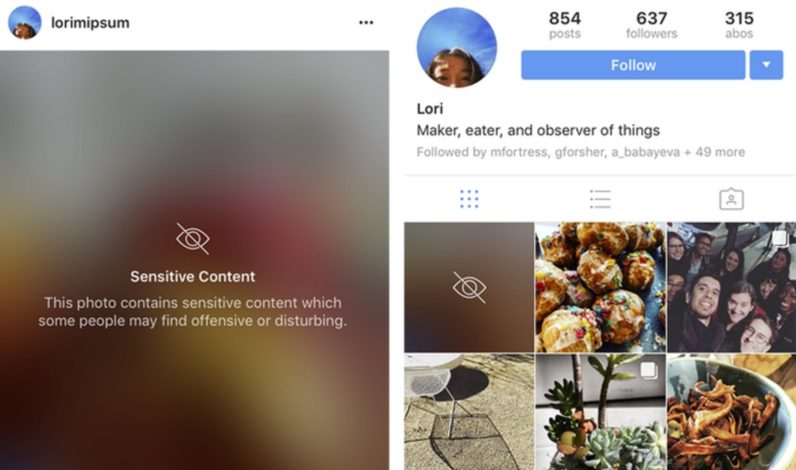 Instagram has long struggled with moderating its posts (most often around whether or not female nipples are allowed). Now the company is offering up a partial solution: it will soon begin blurring “sensitive” posts, which you will need to manually reveal.

Instagram doesn’t specify what qualifies as a “sensitive” post other than it having been reported by a user and then deemed so by a moderator. However, the company does say these posts don’t actually violate Instagram’s community guidelines, they might just make some people unhappy:

As part of our goal to build a safe environment, we also have some updates to announce. Soon you may notice a screen over sensitive photos and videos when you scroll through your feed or visit a profile. While these posts don’t violate our guidelines, someone in the community has reported them and our review team has confirmed they are sensitive. This change means you are less likely to have surprising or unwanted experiences in the app. If you’d like to see a post that is covered with a screen, simply tap to reveal the photo or video.

Basically, certain photos will still be allowed on the platform, but they might be blurred out if they are potentially controversial. As phrased, it sounds like Instagram is going to censor images even more than it currently does. That could get messy, fast.

For example, Instagram’s community guidelines currently say this about nudity:

We know that there are times when people might want to share nude images that are artistic or creative in nature, but for a variety of reasons, we don’t allow nudity on Instagram. This includes photos, videos, and some digitally-created content that show sexual intercourse, genitals, and close-ups of fully-nude buttocks. It also includes some photos of female nipples, but photos of post-mastectomy scarring and women actively breastfeeding are allowed. Nudity in photos of paintings and sculptures is OK, too.

By these guidelines, breastfeeding photos are currently allowed on the platform. But what happens if someone reports the post because it shows just a little too much for them to handle? A moderator could mark it as sensitive, and the photo would be blurred out. You could argue that’s only marginally better than outright removing the photo.

Or maybe I’m wrong. There’s a chance the change could be for the better, and that Instagram is actually going to let through more content that might have previously removed, but simply placed behind a filter. Or maybe it will use the filter extremely sparingly, in the cases where the content’s public viability is too ambiguous.

It’s also worth noting cultural differences, and how what’s sensitive in one part of the world may not be in another; Instagram could make these filters regional. And of course, there are other kinds of sensitive content, like well-intentioned but gory photos of war or animal cruelty, that people may not want to see on their feeds every day.

In any case, the company is going to have to be more transparent about what is sensitive and what isn’t going forward. Also, an option to turn off the blur-filter altogether would go a long way. We’ve reached out to Instagram for a bit more clarity and will update this post if we hear back.

Read next: Spanish teen sues mother after she confiscated his phone