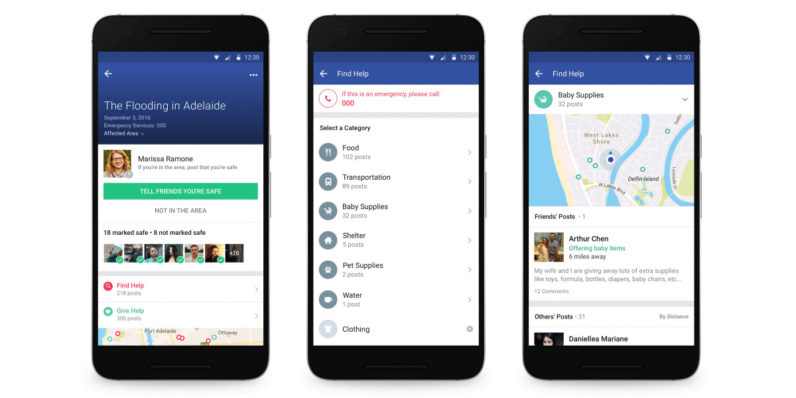 Facebook is updating its Safety Check feature so people in areas facing a crisis, such as a natural disaster or civic unrest, can offer or find a helping hand nearby.

Here’s how Community Help works: If your town’s been hit by an earthquake, you can offer support with things like shelter, food, transport, baby and pet supplies, and clothing to people in your area by creating a post with your approximate location.

People in need can then look up such offers for help in a categorized feed within Safety Check and then message those users to get in touch. It’s now available for natural and accidental incidents – such as floods or building fires – in the US, Canada, Australia, New Zealand, India and Saudi Arabia.

This builds on Facebook’s previous efforts to assist communities in times of trouble. It launched Safety Check back in 2014 to allow users in places struck by crisis to let their contacts know they’re okay.

Last November, it switched from manually turning on Safety Check to allowing users to trigger the feature by posting about the events; Facebook’s system picks up keywords and then verifies the threat with a third-party security firm before enabling a Safety Check in the affected geographic area.

The new Community Help functionality was inspired by people’s use of the #PorteOuverte (‘Open Door’) hashtag to offer shelter in the aftermath of the Paris attacks in November 2015. It began testing the feature last year. and will begin rolling it out more widely after two weeks.

Read next: YouTube's Go app for data-conscious viewers is now available on Android