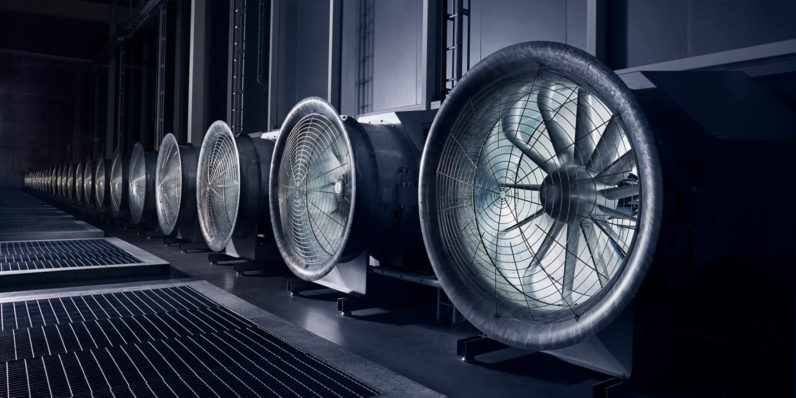 Data centers are generally massive, but can be very beautiful. Google does them pretty well, but as it turns out, Facebook does too.

The company’s CEO Mark Zuckerberg recently shared a few pictures of its Luleå, Sweden-based data center on his account.

The images showcase the server park’s beautiful architecture, the Facebook employees who work there and the different kinds of technology that are used to store a big part of the data from more than 1.59 billion people.

In the captions for every picture, he wrote some interesting trivia like:

About 150 people work here, but the data halls are frequently empty. Because of the simplified design, we need only one technician for every 25,000 servers.

It gives an interesting look inside the workings of a huge facility that miraculously only employs 150 people, but pumps around personal data about almost one in four people on earth.

Take a look at the pictures and their captions below:

The main data hall is so big that engineers move around on scooters.

These enormous fans draw in the outside air to cool the tens of thousands of servers in the data hall. In the winter, when temperatures plunge to -30 degrees the situation is reversed, and the heat from the servers warm the massive buildings.

The equipment is reduced to its basics so it runs cooler. It can also be easily accessed and repaired quickly. A few years ago, it took an hour to repair a server hard drive. At Luleå, that’s down to two minutes.

Old and obsolete hard drives are crunched, forever protecting privacy. Christer Jonsson is in charge of this important task. “I must be very careful,” he says.

The building’s exterior reflects the innovative designs inside.

The center opened in 2013, and was our first outside the US. Wherever possible, we used the beautiful wood and art of the area to showcase local craftsmanship.

“Look at these racks, the network devices, the cabling. Everything is like reference model!”
– Max Zavyalov, Network Engineer in Edge & Network Services team

“Look at these racks, the network devices, the cabling. Everything is like reference model!”
– Max Zavyalov, Network Engineer in Edge & Network Services team

“There is no more efficient data center in the world.”
– Jay Park, Director of Data Center Design Engineering

“The biggest challenge working here? Getting to the data center by car when it is -30 degrees C outside!”
– Emilie De Clercq, Data Center Technician

“There’s a beauty in all of this. It’s like a massive and very well-orchestrated machine, where everything works in concert and allows people across the planet to communicate and share in an incredibly efficient way.”
– Joel Kjellgren, Luleå Site Manager

“Working here is to be trusted with great responsibilities since this is a really important center for all our users. I like the challenge to not only do my best, but also to always find better and more safe solutions for us.”
– Joakim Karlson, Mechanical Systems Specialist

“It’s a very important job, and I am very proud to be trusted with that responsibility.”
– Linnéa Svallfors, Security Officer

The data center is huge, but the idea that launched it began on the back of this paper napkin. Late one night, while traveling, engineer Jay Park sketched his vision for a system that streamlined the way power moves from the local utility grid to our servers.

Luleå is a small coastal town just south of the Arctic Circle, and near the top of the world. It’s surrounded by dense forests and icy rivers.

Read next: Fuze Case is bringing the headphone jack back to the iPhone 7