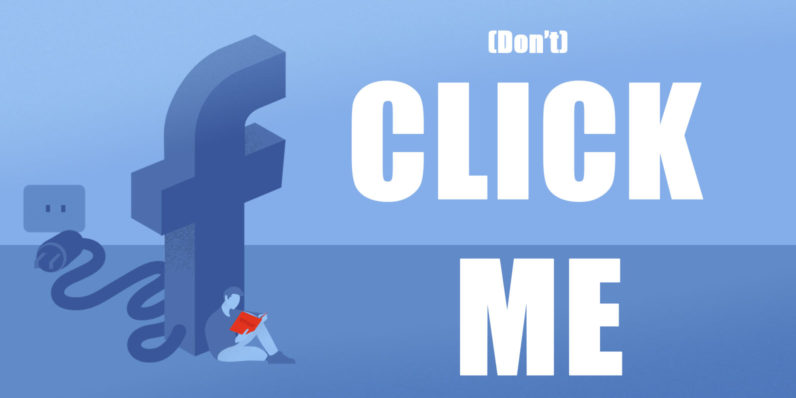 Facebook has tweaked its New Feed algorithm many, many times in its attempt to keep the posts you see relevant, but the change it’s rolling out today may be the most important one yet: Facebook is vowing to kill clickbait.

It’s a potentially huge move, and one that makes journalism better for almost everyone involved.

Now Facebook is filtering out clickbait much like Gmail hides spam. It’s detecting specific words, structures, and styles in titles which “intentionally leave out crucial information, forcing people to click to find the answer.” Here are some Facebook-provided samples of titles you will be seeing a lot less of:

In other words, the headlines we all cringe at (…but sometimes click on anyway). There’s a whole subreddit dedicated to them, and here are some choice samples from Imgur:

Facebook says it’s had actual humans review “thousands” of headlines, and ended up categorizing clickbait under two key points: headlines that withhold information required to understand the context of an article, and ones that exaggerate the article and create misleading expectations. The penultimate headline above purposefully omits who tripped on the red carpet, while the last one’s hyperbole is misleading (apples are bad for you only if you eat a ridiculous amount of them.

It’s worth noting Facebook has previously tried to weed out clickbait by looking at how quickly users returned to their feed after visiting a link. That method is still in place, but the new approach seems like a much more effective approach.

How it changes your News Feed

Articles with transparent, informative headlines will now show up higher on your feed, while potential clickbait will be listed lower.

It’s worth noting that Facebook isn’t filtering out individual clickbait posts, but rather ranking complete Pages and domains based on their overall tendency towards opaque headlines. That means a page or website can probably get away with sending out an article with a clickbait headline every once in a while – probably for the better, since algorithms make mistakes – but those that rely on clickbait as their general source of traffic could be severely impacted.

Facebook isn’t saying it will completely remove clickbait, mind you, but assuming(or rather, hoping) such articles get ranked low enough, it’s effectively the same thing. As an aside, this shouldn’t affect satire pages like Clickhole. If a page stops sharing clickbait, they will move up in the rankings again.

We can all agree clickbait sucks, but it happens because it works. Even when I know I shouldn’t do it, I’ll sometimes click on an obvious clickbait simply because I’m curious, and that takes away from time that might be spent reading a higher-quality article.

On a personal level, it put me in a pickle as a writer. We strive hard to avoid explicit clickbait here at TNW, but at the same time acknowledge that giving away too much in the headline can make it less clickable. That sometimes leads to a tug of war between writers who want quality content tied to their names and social media teams whose job is to ensure the most possible engagement.

That’s why today’s change matters: Facebook has the power to stop clickbait from working, while making informative headlines more relevant.

Consider that over 60 percent of American adults get their news from social media (a number which will only grow). Facebook is the largest social media platform, effectively making it the singular company with the most control over what content people read. If Facebook hides clickbait, people won’t read clickbait.

In the ever-tumultuous market of digital media, publishers can’t afford to not perform well on Facebook. In theory, publishers will have to either adjust their headline strategy or die out.

Why it could be an issue

Of course, that depends on how committed Facebook actually is. Discussing it within team TNW led to some fairly heated debates about how serious Facebook is about killing clickbait for good.

While it all sounds good on paper, Facebook still needs to make money. If honest headlines lead to lower overall engagement, it’s unlikely the tweak will remain long-term. People could simply read their tabloids elsewhere, after all.

There’s also the worry that this is the first time Facebook is systematically judging writers and social media teams based on their posting style. What if we post something we consider enticing, but Facebook considers to be clickbait? Who’s to say that Facebook can’t similarly tweak their algorithm to filter out other types of posts they don’t like?

Moreover, what if people actually – *gulp* – like clickbait? Again, it works for a reason.

But the way I see it, just because it works, doesn’t mean it’s what we want to see. I’ll eat junk food if presented to me, but I’d much rather be fed healthy options.

The process will take some fine tuning – Facebook could open up a public survey of what articles users consider misleading, for instance – but I still vouch for this as the best tweak Facebook has made to the News Feed yet. I’d like to think that less clickbait doesn’t mean people will read less articles, but will simply redistribute their attention towards higher quality content.

A world with less clickbait can only be a good thing. Good riddance.

Read next: New Apple ad features the late Maya Angelou (and it's beautiful)