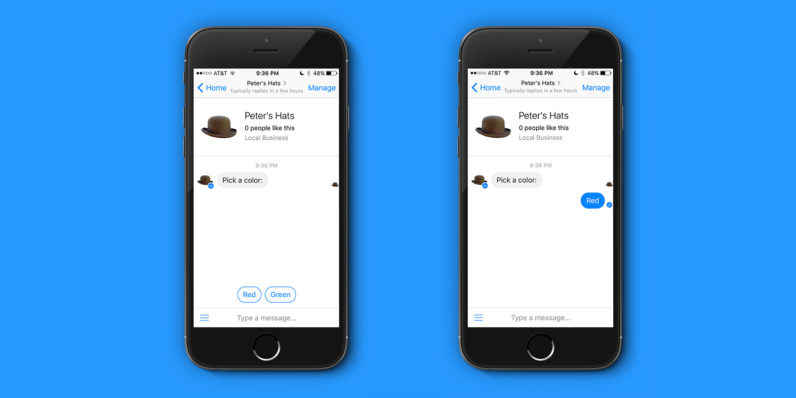 Since Facebook opened up its Messenger Platform for creating interactive chatbots in April, the API has been used to develop more than 11,000 bots on the social network’s messaging service.

Today, the company announced a raft of new features to Messenger Platform that will help developers add new functionality to their bots and improve the experience for their users.

For starters, bots can now display buttons for quick replies and a persistent menu in conversations, making it easier for people to communicate without having to type several commands.

For example, if you’re talking to a bot for a restaurant, it could show you buttons for choosing which day of the week you’d like to book a table for and select a time slot the same way. It could also let you switch from the booking process to customer feedback just by tapping the option in a menu within the chat screen.

Bots will also be able to send and reply with GIFs, audio, video, and other files. That’s handy for things like sharing directions to a venue and restaurant menu PDFs, as well as adding some color to an otherwise robotic interaction.

Users will be able to mute bots just like they can mute a conversation with their friends. Plus, they can rate bots and send feedback to developers, which will be available to view privately in a dashboard.

In addition, Facebook is launching a new blog for bot developers, covering tips, case studies and a special Q&A series with some of the businesses and brands who have already built bots. It doesn’t seem to be live just yet, but will probably become available shortly.

The new features will certainly make bots easier for people to interact with, and reduce the number of errors developers will have to deal with. The addition of buttons and menus will make bots feel more like dedicated apps for businesses, but it remains to be seen just how many people choose to use them over apps and sites.

Read next: Nintendo's Shigeru Miyamoto is judging a $10,000 contest for the ultimate gaming t-shirt