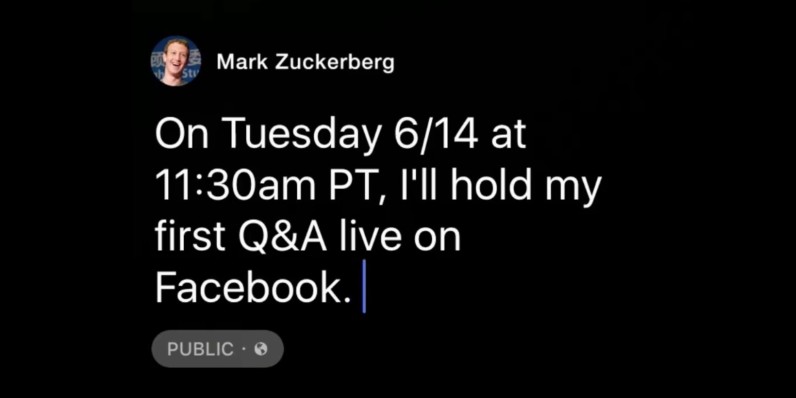 Mark Zuckerberg has been doing Q&A sessions on Facebook since 2014, but those were all pre-arranged responses to earlier questions. Next week he’s amping up the stakes by using the recently introduced Facebook Live platform.

The session begins on June 14 at 11:30 AM PT. The basic format is still largely the same: he’s started taking questions today and some of the top voted ones will be answered next week. The difference is that Facebook Live allows people to make comments during ongoing streams that will be visible by Zuckerberg himself, adding an additional interactive element as he answers the questions.

In other words, what you say on the stream next week will likely affect how Zuckerberg goes about answering this week’s questions. Some of the top voted comments so far include a suggestion to add ‘folders’ to Facebook to easy save things like recipes and hobbies (think Pinterest boards), a question about meshing live videos together into one virtual reality super-view of an event, and an existential inquiry about the future of the humanity.

So really, you can ask pretty much anything. Head on over to Zuckerberg’s profile to leave your own suggestions – who knows, maybe he’ll be answering one of your questions.

Read next: Colorware-skinned 12-inch MacBook looks like an Apple IIe from the 80s