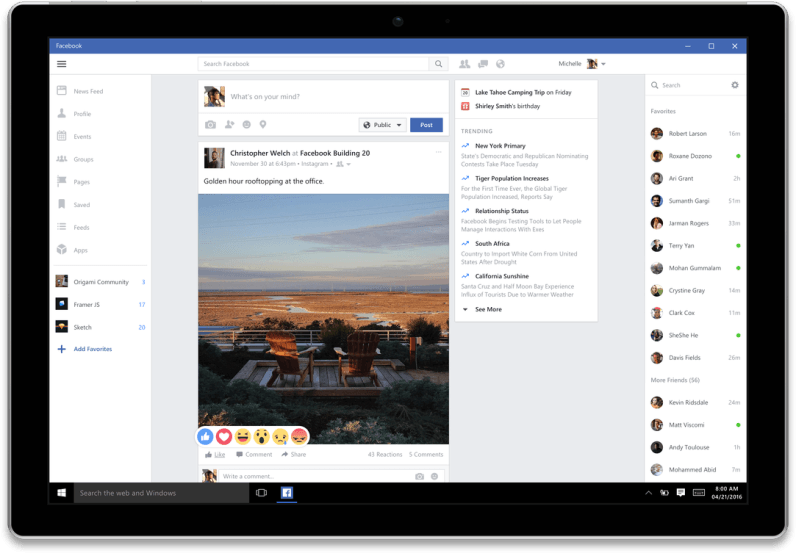 Windows 8 and Windows Phone 8 had a rough time getting big name companies to build proper apps for it, but Windows 10’s Universal App Platform might finally be starting to counter this trend. As announced during Build 2016, Facebook, Messenger, and Instagram now have native Windows 10 apps that actually have the features you want to use.

There was previously a Facebook app on the Windows Store built for Windows 8 desktop users, but it was about as barebones as you could get. You were better off just opening it up in a browser.

Now desktop users can access the full set of reactions, add stickers to comments, view trending topics and basically do all the things you’d expect from an up-to-date Facebook app. And since it’s built with the UWP, that means it uses native Windows 10 features like notifications pop ups, live tiles, and sharing across apps.

The Facebook app’s best feature, however, may be its in-app browser, which is a bit more powerful than the usual mobile varieties. Mainly, it supports multiple tabs.

After opening a link, you can hit the back button to return to your feed; your browser stabs will remain lined up along the bottom, letting you easily switch between Facebook and whatever listicle you were just reading. It renders sites quickly and smoothly too.

The same goes for Messenger, which didn’t even have an app for desktop Windows 10 devices. You can use stickers, group conversations and GIFs, view notifications in the Action Center, and see unread messages in your Start Menu Live Tiles.

Meanwhile Instagram is rolling out for Windows 10 Mobile after being in beta for a few months. It would be nice to see a desktop edition for Windows tablet users, but perhaps that will arrive somewhere down the road.

The three apps willl be available in the Windows Store later today, and Facebook and Messenger will also be getting up-to-date mobile apps “later this year.” It’s a sign that Microsoft’s Universal Windows Platform strategy might just be working, as Facebook and other developers just have to build one app that can work across a variety of devices – that ultimately helps Windows 10 Mobile.

While that platform has struggled to build a following, the desktop version of Windows 10 isn’t going anywhere; if Microsoft can get enough big-name developers to build Windows 10 desktop apps, porting them to mobile is relatively simple.

Given Facebook, Messenger and Instagram are three of the most popular apps out there, their presence can galvanize other developers to develop UWP Windows 10 apps as well. Here’s to hoping Microsoft has the basic set of popular apps covered by the time that mythical Surface Phone rolls out.

Read next: Your step-by-step guide to choosing a designer