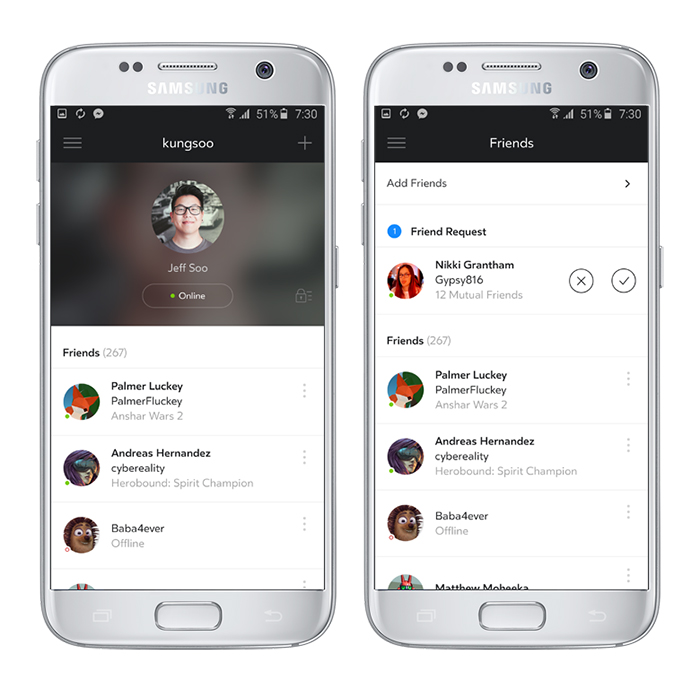 While one could hazard that gaming remains top-of-mind for those interested in VR, it’s not the only experience potential users are drawn to. With that in mind, Oculus announced today a bevvy of new features to tap into the social media side of VR on a Samsung Gear VR device.

“The immersive sense of virtual reality is even more compelling with friends,” the blog post says.

Starting tomorrow, Samsung Gear VR users will be able to make a social profile that is searchable through the Oculus platform. It looks like a social-oriented gamer handle that’s less tied to purchasing games, inviting people to connect with each other and giving them the opportunity to use their real names.

Users will also be able to create rooms within Oculus social, meaning that avatars will be able to watch Twitter streams or Vimeo videos in real time with groups of people.

Perhaps most important from a social perspective is the introduction of a new Facebook Videos tag to Oculus Video. Starting next week, users will be able to connect their Facebook accounts to see personalized content based on the pages and people they follow. Soon, the platform will also be able to accommodate Likes and shares.

For those who still want a little gaming with their social, the platform has two new social games, ‘Social Trivia’ and ‘Herobound: Gladiators.’

The proactive move into social falls right in line with Facebook CEO Mark Zuckerburg’s decision to jump headlong into the world of ‘Social VR.’ This is no doubt the first of many moves to create a community around the Oculus platform.

Read next: I tried Go Cubes chewable coffee, and I'm pretty sure this is what cocaine feels like