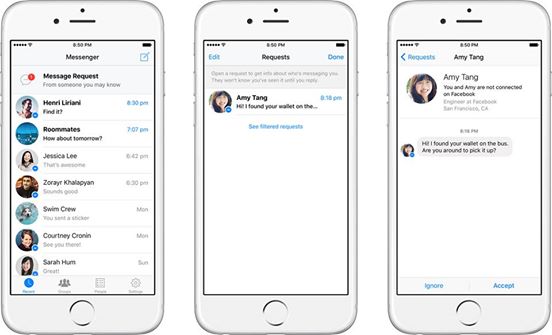 Now, when someone sends you a message who isn’t at least a friend of a friend or has your phone number, it will show up as a ‘message request,’ which you can choose to accept or ignore.

Basically, it makes messaging someone you just met as easy as it is to add them in the first place, removing a step before you can start communicating. And though it may seem a little more invasive than the old method of just separating messages from strangers, it also makes it easy to communicate with people without having to actually add them to your friend list. I mean, maybe you’re not even really friends IRL, after all.

Of course, nobody wants spam messages, so Facebook says it will continue weeding those out.

It may seem like a small update, but Facebook is calling it a ‘fundamental development’ that will affect the way people use Messenger. That’s probably a reference to Facebook Messenger as a platform, such as allowing businesses to contact you via the IM service (again, without the need to friend each other).

Message requests are starting to roll out to all Facebook users today.

Read next: Verizon completely forgot to use its new logo on the Droid Turbo 2