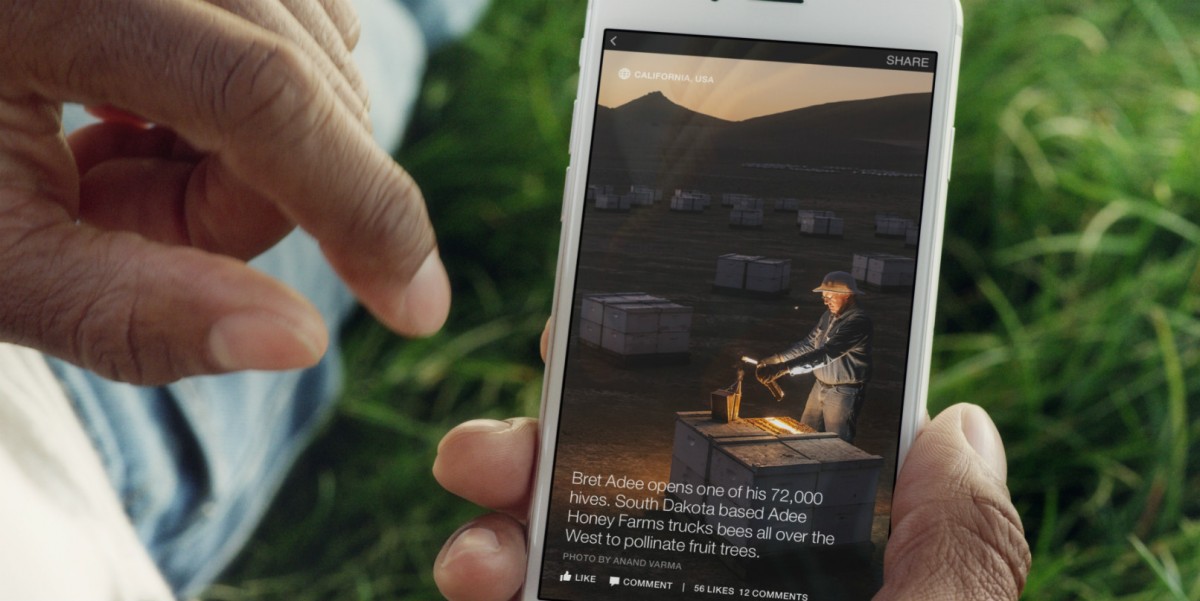 We knew it was on the horizon and now here it is. Facebook has announced the arrival of Instant Articles, a new format that allows publishers to create articles that load natively inside Facebook’s iPhone app (it’s iPhone-only for now), rather than sending users off to the Web.

At launch, the USA’s The New York Times, National Geographic, BuzzFeed, NBC and The Atlantic; the UK’s The Guardian and BBC News, and Germany’s Spiegel and Bild are in on the action.

So what’s in this for everyone?

Facebook has developed a platform that allows publishers to add high-resolution images that can be zoomed in an react to tilting of the phone, videos that auto-play as you scroll to them, interactive maps, audio captions and in-line commenting on individual parts of an article. TechCrunch reports that the team behind Paper took their learnings from that US-only app to this new format, although Paper will continue to be offered.

Speed is another benefit. Facebook says that while it can take eight seconds to load a Web page from the Facebook app, Instant Articles… well, the clue’s in the name.

In the months leading up to today’s announcement, much has been made of the threat of Facebook bringing publishers onto its native platform, giving up control over their content. For its part, Facebook is offering publishers 100 percent of ad revenue from Instant Articles. Recode reports that the articles will allow for a single 300 x 250 banner ad unit.

According to Recode, Facebook is also offering analytics info that can feed into Google Analytics or Adobe Omniture. Data about performance will be fed to ComScore so that publishers don’t lose out in that respect as their Web traffic drops due to people consuming content in-app.

As for other publishers not in on the program, who may be worried about whether Instant Articles will impact on people seeing their work in people’s News Feeds, Facebook says that its algorithm won’t promote the new format over traditional links.

Facebook gets to keep users in its app, seeing articles that load instantly, rather than going off to a website that they may stay on instead of coming back to the warm, blue arms of its own domain.

While it’s not gaining financially from ads displayed inside Instant Articles right now, Facebook is beginning a relationship with publishers that could change if Instant Articles are a success. And if users love the format and think going off to a website is a second-class experience… well, Facebook will have the publishers in a compromised position.

We’ve not seen any Instant Articles inside the Facebook iPhone app yet, but they should launch on late Wednesday with the first set appearing here. (Update: here’s the first from The New York Times, although for the best effect you’re best visiting their Facebook Page on an iPhone). No doubt other devices, platforms and publishers will be supported over time, if users like the format.

Still, as Marketing Land notes, Instant Articles sets a precedent that Google may be tempted to follow. Imagine, clicking a link in a search result and the result loading in a Google-hosted shell. That would be bad news for the open Web.