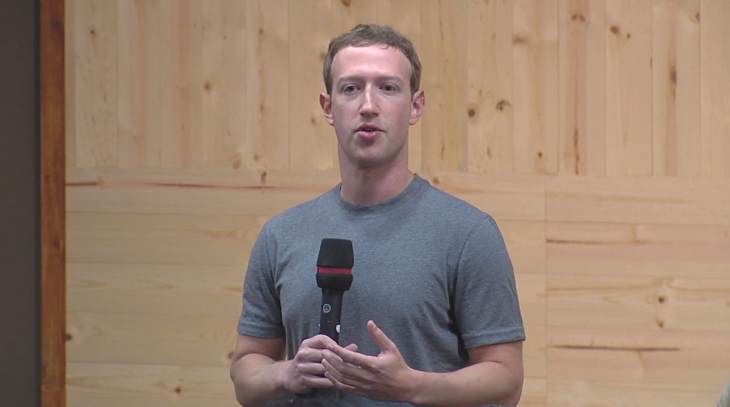 Update: You can now watch the full video from Mark Zuckerberg’s Q&A yesterday below.

Today Facebook hosted a video AMA of CEO Mark Zuckerberg. A week ago, Facebook asked users to drop questions for the CEO. Today, some of them got their answers.

Facebook has had weekly Q&As for employees for years. Today is the first one the social network invited its users to participate. But Zuckerberg wasn’t alone, he had Sheryl Sandberg and others on the management team in attendance in case Mark gets stumped by a question.

The audience included users and students some of which asked the CEO questions about the site and the company. Here is what was asked:

Why did you force us to install Facebook Messenger?

“The first thing I want to do is acknowledge that asking everyone in our community to install a new app is a big ask. We really believe that this is a better experience and the messaging is really important. Each app can do one thing well.”

This is pretty much what Facebook has said before about the Messenger app. By separating the apps, both apps received a performance boost.

What’s you favorite feature that’s been developed but not released?

A lot of things he thought were really good when rolling out, they weren’t as good as he thought they would be once live. For example, in 2013,Facebook was getting a lot of feedback on how the design of the newsfeed felt outdated. When they released a new version of Newsfeed to select users, it turns out people did not like it.

The issue was Facebook had designed the feature for the big monitors the company uses internally and not the smaller screens the average users has. The result was people were only seeing a single post at a time on their display. It was rolled out to a small number of people and the company decided not to roll it out further.

When will our Facebook fan page reach be coming back?

“The other thing is our goal is to build the perfect personalized newspaper for people in the world.” Facebook wants to personalize what you see. There is an inherent conflict in that system. Facebook optimizes for readers instead of a business’s page posts and the company focuses on trying to publish really good content that’s compelling to customers.

How accurate is the movie Social Network?

“I kinda blocked that one out. It was a very interesting experience that was supposedly about my life. The reality is that, writing a code and building a product is not that exciting,” he said. Zuckerberg also said the filmmakers went out of their way in the movie to get interesting details correct like the office space, but other items, not so much. “They just kind of made up a bunch of stuff that I found hurtful”

Do you have programs for young people to start a business?

Is Facebook intending to take over the mobile industry?

There are 4.5 billion people that don’t have the internet, the company feels it has the social responsibility to spread the internet. Facebook has a bunch of efforts called Internet.org with other companies in the industry. In some geographic regions, there are areas where there isn’t a mobile internet industry, instead Facebook can beam access to their phones.

He also touched on people in areas with Internet access, but no way to get online.

In other words, not really. It just wants to get Internet to everyone.

Is Facebook losing its charm and is it information overload?

“My goal was never to make Facebook cool.” Zuckerberg’s goal is the ability to reliably communicate and connect to people. Facebook just wants to be there and make it work whether it’s text, photos or video.

Zuckerberg notes that Facebook’s Newsfeed algorithm cuts down on information overload by just surfacing information you care about. Facebook will be continuing to tune the Newsfeed.

Why do you wear the same shirt everyday?

Sheryl Sandberg told the audience that Mark has more than one of that style of T-shirt.

Zuckerberg says that making even small decisions about what you wear and eat is tiring. “I feel like I’m not doing my job if I spend any of my energy on stuff that’s frivolous.” If Mark has to decide what to wear every day, he’s not thinking about Facebook.

How do you keep the passion running for Facebook?

“It starts with doing something that you think is actually important.” He also notes that working with people that “get it” helps.

Your perspective on diversity in tech?

“It is not the diversity recruitment teams job, it’s everyone’s job” He said that having a diverse team results in better work. He also touched on the problem of fewer women in the industry and talked about the need to work on getting girls interested in computer science.

Sandburg introduced the girls who code in the audience. She noted that it’s a matter of expectations. Girls need to be encouraged to enter the field.

Why are you and Facebook getting involved in the fight against Ebola?

Do you have thoughts on skill-based volunteering?

Facebook encourages engineers to engage in the community. The company believes in continuing education both internally and with people on the outside. Not really any solid answer on a company-wide volunteering program. Individuals in the company volunteer.

What was your technique to overcoming obstacles when you were building the company?

“You have to remind yourself that you need to focus and it’s not going to bother you. But it does bother you. I am human. Still.” What got him through it was the people that were around him. Find a team that will help you get through. “You don’t have to be super human.”