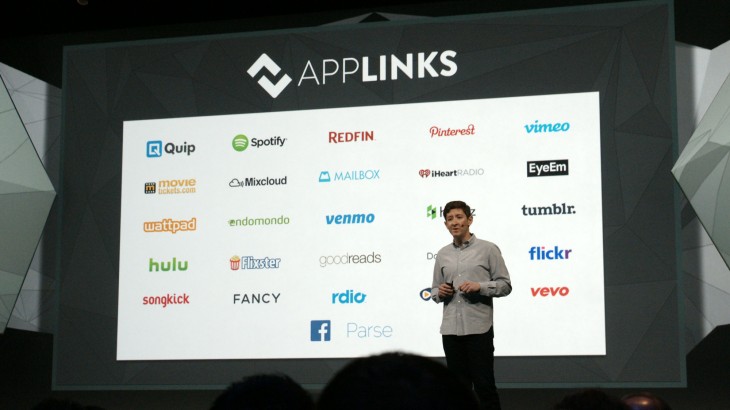 At F8, Facebook introduced App Links, a cross platform app deep linking system. Today, the company introduced analytics for events via the Bolt SDK to help developers track how users are interacting with those links.

In its ongoing desire to offer open-source tools, Facebook not only offers App Links analytics via Facebook and Parse, but also via a third party analytics tool, Mixpanel. Plus, anyone could build their own analytics solution. App Links Product Manager Vijay Shankar also announced Windows universal support so the app links can work on the entire Windows ecosystem.

App Links is an open source solution for cross-linking between apps. Instead of a link opening in a mobile browser, it will open the app if it is installed. For example: If you see a Spotify link in Facebook, the link will open Spotify when you’re already logged into your account. It reduces the friction of having to log into your Spotify account in your mobile browser.

Today’s news lets those developer track all those clicks, from the link out to a second app, to how many people are returning to your app after you sent them to the secondary app the system lets you keep track of how users are using App Links.

“Apps need to start to believe that everyone is going to link to each other,” says Shankar. He sees the current state of inter-app linking as the web in the 1990s when sites were afraid to send users to other sites via links. With the new App Links analytics support, developers could help inter-app linking become more commonplace.

Read next: Which crowdfunding platform is right for your startup?