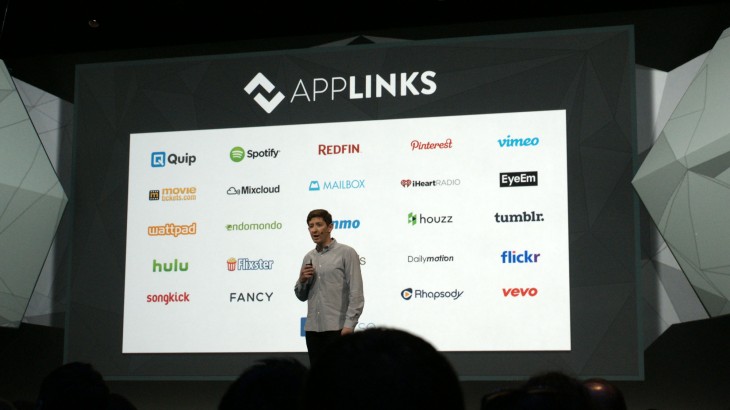 Announced at at f8, Facebook’s open-source App Links lets developers deep-link across mobile apps. Today the company announced that over a billion individual link destinations have been created within apps using App Links and a back button for quicker navigation between those apps.

Facebook says that hundreds of apps have currently adopted App Links on iOS, Android and Windows Phone including newcomers Vimeo and Live Nation. Live Nation support is great if you’re a fan of concerts. “Other apps can now send you to the Live Nation app. You have the great content experience and you’re two taps away from completing a transaction,” says Vijay Shankar, Product Manager at Facebook for App Links.

Traditionally, when a mobile app links to another service, even if that other service has an app on the phone you’re using, that link it opens in a mobile browser. Even if you’re signed into that service’s app, you’re forced to sign in again outside the app. Facebook’s App Links fixes this with a cross-platform solution that uses URLs to map destinations inside apps.

The social network also announced a new navigation feature, a back button to quickly switch between apps. While Android has a built-in back button, iOS does not. Now when you jump to an app from another app, a navigation element appears at the top of the destination app to return you to the original app. It’s similar to Facebook Messenger’s “Return to Facebook” bar. The UI control is built into the SDK and according to Shankar, is easy to implement.

Update: An earlier headline for this article indicated that Facebook updated the App Links SDK today with the Back Button feature. The feature has been available for a few weeks according to Facebook but hadn’t been announced until today.

Read next: New York’s The Infatuation and growing up on the Internet