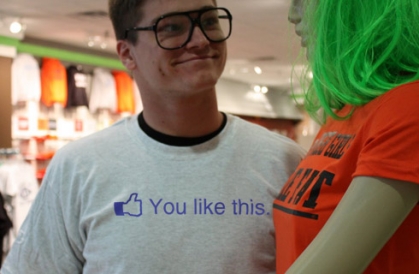 Running out of things to talk about? Facebook is starting to roll out a feature that will show you when more than one of your friends is discussing the same topic. While Google’s Circles make it easy to define people in the ways that you see them, this move from Facebook is more of an automated curation tool that should be based off of its search algorithm.

As spotted by Tipdesk, you can see here that Facebook is placing similar topics into a single, informational post that is generated by the site rather than by your friends themselves:

It’s important that the feature works well, so that a friend talking about oatmeal-based soap doesn’t get grouped with a friend talking about eating a bowl of oatmeal, but we’re probably some time away from seeing how Facebook’s algorithm handles those semantic clues. It’s worth nothing, though, that TNW reader Chris Brandrick has seen what happens when the results go wrong:

If it does work well, then Facebook’s 750+ million users will be going head-to-head against Twitter’s trending topics in a way that’s more readily available for brands to track. What we have to hope we don’t see, of course, is promoted topics that work their way up your news feed.

We’ve dropped an email over to Facebook to see what the company has to say about this topic aggregation, and it isn’t terribly surprising:

We’re always working on new ways to surface relevant and interesting information, and this particular feature is designed to show people any trends among what their friends are saying.

In short, things should get better over time. At least if Facebook plans on making the feature more useful than just a keyword search.