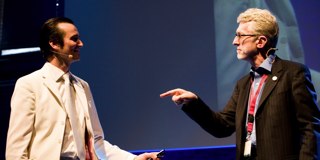 Well its official, Facebook founder Mark Zuckerberg is a fully-fledged celebrity and yes, a household name.

Despite playing no role in the development of The Social Network, Mark Zuckerberg decided to make a surprise appearance on tonight’s episode of Saturday Night Live.

The appearance saw Zuckerberg play alongside Jesse Eisenberg, the actor who played him in the movie. Interestingly this is apparently the first time the two have ever met.

There had been rumors that he may appear on the show but Zuckerberg was reportedly reluctant, thankfully he came through and the response on Twitter and Facebook seems positive – if a little “awkberg” (you’ll soon understand).

Eisenberg asks “You … ever end up seeing the film? You know, The Social Network?”

“And what did you think?” Eisenberg asked.

“It was … interesting,” Zuckerberg replied.