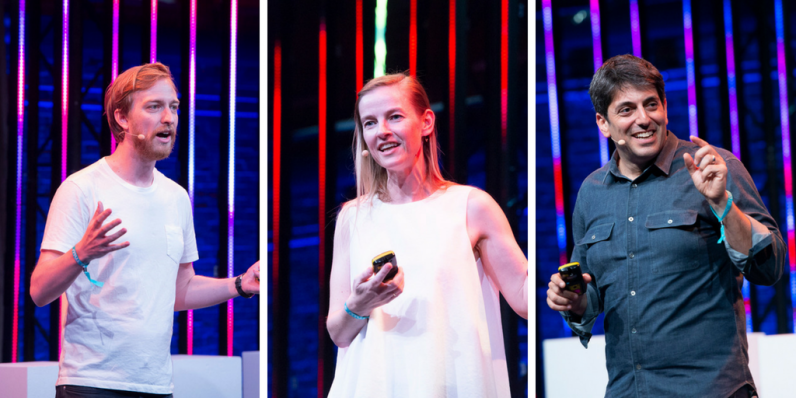 Ecommerce giants like Alibaba are finding new ways to reinvent the online shopping experience. Where does that leave brick-and-mortar stores — will they adapt or die?

At TNW Conference’s Marketplace track, we heard from ecommerce experts to see what lies in store… It looks like we’re going to see a radical change in the coming years. Here’s our recap of the track:

Henry began with a rather bold statement about the current status of ecommerce:

Ecommerce hasn’t evolved much since it began — it’s still the same basic concept, just on a smaller screen with a nicer UX.

He explained that it’s certainly grown considerably, and will continue to do so. The problem, according to Henry, is that Amazon is the driving force of that growth. “Amazon’s paradigm for a good online transaction is the world’s paradigm, because of how large it is,” he explained.

So how do we set out to make ecommerce more engaging? The key right now is social media.

Social media is about connection. Customers trust the opinions of other customers when considering a purchase, and that’s because we’ve lost faith in brands. It doesn’t matter what Glossier thinks about Glossier, it matters what customers think of Glossier.

They control the terms of engagement with our customers. I hate to say it but social media has become the new department store.

So what should brands do about it? Henry wants to see technology push the fold, by companies creating their own platforms to engage with their customers.

Customers are the holy grail of ecommerce — they hold the power. As such, Henry wants them to be treated as stakeholders, rather than simply ‘people who buy stuff.’

This will inevitably require a tremendous amount of money to develop technology within companies. According to Henry and Glossier, it’s worth it.

Want to hear his talk for yourself? Watch it here:

Ron has a very interesting job. He described it like this:

We obsess over building really emotional consumer experiences on mobile devices for our most fanatic fans.

He’s referring to ‘sneakerheads’ — sneaker fanatics who go mad for Nike’s footwear. His goal is to “bring the sneakerhead soul” into his apps. So how does he do it?

Ron explained that the sneaker culture is on a similar level to gaming. It’s composed of two segments: 20 percent are diehard fans — ‘hypebeasts’ — who lead the pack in terms of information and passion. The remaining 80 percent are fans who are more casual, but are dying to know more and don’t know how to.

This creates a great environment for getting the entire sneakerhead population engaged, according to Ron. Using the tribal/cult model of social media engagement, the hypebeasts act as influencers, where the casual fans follow and can gain information from them.

Ron and his team have developed several wildly successful apps to achieve this full-on engagement. Most notably is Nike’s SNKRS stash. “It’s our version of Pokemon GO,” Ron said.

Sneakerheads scour their cities looking for landmarks, which allow them exclusive access to shoes via their mobile phones. Once they’ve found it, they can immediately purchase them online.

It’s hard to describe the immense hype that this has built — it’s phenomenal. The company has seen an unbelievable amount of growth in engagement thanks to these features, including the integration of augmented reality.

AR acts so powerfully here, as an incredible ‘surprise and delight’ moment for our customers.

He’s referring to the fact that upon finding an exclusive shoe, it pops up on the screen as a 3D rendering embedded into the real world.

Speaking of the future of ecommerce, Ron stated:

Why bother with a ten year lease? Even an advertisement can become a pop-up store with this app.

This is completely changing the game of ecommerce. To get a sense of the hype for yourself, watch his full talk here:

Katrina spoke to the audience about the coupling of brick-and-mortar stores with ecommerce. Rather than the two fighting against each other, she believes that the future holds a unified shopping experience.

She began by explaining that the excitement around Amazon Go, the brick-and-mortar convenience store that requires no check-out line, has faded. In its wake, China has taken the lead by launching their own, more successful, versions.

The concept is the same as Amazon Go — you grab what you want and walk out, thanks to data tracking and personal IDs. The difference between Amazon Go and the numerous Chinese versions is that China provides a fantastic breeding ground.

Each citizen has to register their mobile phone to their ID, meaning that mobile payments are more reliable. There’s also a much higher population density in urban areas, and “patchy infrastructure which leaves many without a nearby convenience store,” Katrina said.

This means that China is paving the way for what Katrina referred to as a ‘Unified ID.’ Customer tracking is commonplace on ecommerce sites, but there’s a huge gap in physical stores. With ecommerce giants like Alibaba venturing into the field of brick-and-mortar, the aim is to fill that gap with data.

Therein lies the future of ecommerce: a coupling of physical and online stores, where customers gain functionality and experience, and companies gain data.

We only gave you a taste of the speakers at the Marketplace track. You can watch the rest of the talks right here.