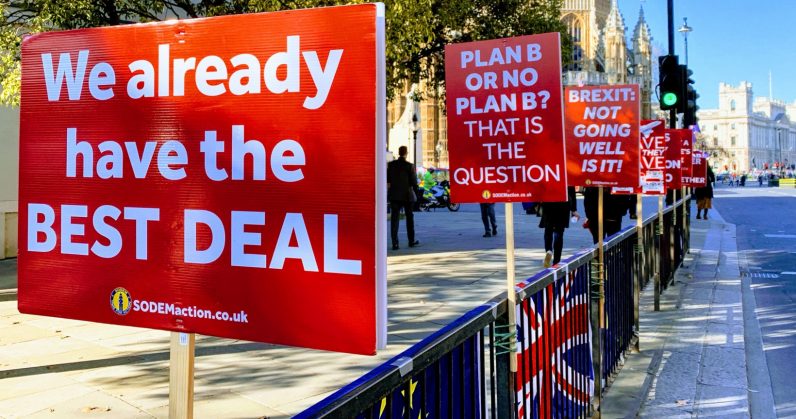 For better or for worse, tech will play a pivotal role in this year’s European elections, which promise to be a heated and fraught affair, and have the potential for the same kind of foreign influence that marred the 2016 US Presidential Election.

That’s not usually the case. European elections are frequently overlooked, as evidenced by their historically low voter turnout. Looking at 2014’s EU elections, for example, shows just 35 percent of eligible Brits casting a ballot for their MEPs. In Slovakia, the turnout rate was even more dismal, with just 13.5 percent voting.

Things will be different this year. Not just different, but also potentially chaotic.

Firstly, you’ve got a Europe-wide rise of far-right Eurosceptic parties, like Italy’s Lega Nord and Germany’s AFD. And then there’s the shocking inclusion of the United Kingdom, which was supposed to have left the bloc on March 29, but instead remains an EU member, as the government tries to sort a withdrawal agreement.

Recognizing the importance of this year’s EU elections, the tech sector (and I use that term quite deliberately, because I’m not just talking about large tech companies) is taking action. In the UK, activists have developed applications to try and raise voter turnout. Elsewhere, initiatives are taking root to monitor Facebook and other social networks for potential electoral malfeasance.

Let’s start off in the UK, where this year’s EU elections are being regarded as a mini-referendum on the direction Brexit has taken. Three years after the initial vote that saw the UK begin the withdrawal process, people are tired and frustrated.

The country is deeply divided. The only thing that unites leavers and remainers is a desire to see Brexit finished with. The main point of disagreement is how. An increasing number of leavers are advocating for the UK to break from the EU’s institutions entirely. Remainers, on the other hand, desire a “people’s vote” on the final deal, with an option to withdraw Article 50 and remain in the European Union.

With Brexit dragging on, people from both sides of the political spectrum are using this as an opportunity to have their say on the process. Nigel Farage’s newly-formed Brexit Party promises to be the primary outlet of rage for leavers. Meanwhile, Remainers have a broader selection of political parties to get behind, including the SNP, Change UK, the Liberal Democrats, Sinn Fein, Plaid Cymru, The Alliance Party, and the SDLP.

Politics is a funny thing, isn’t it? It’s highly probable that the UK’s last EU election as a member will be the first one where the majority of its citizenry are engaged and passionate about the process.

And that will be, in no small part, thanks to the efforts of digital activists (on, I should note, both sides of the Brexit spectrum) who are desperately trying to register voters before the cut-off date of May 7, 2019. Tomorrow.

One campaign, Vote For Your Future, is attempting to encourage young people to register to vote through social media campaigning. The group is non-partisan in its messaging, and claims to work with both supporters and opponents of Brexit.

You've only got 2 days to register to #VoteForYourFuture in the EU elections. Please share and let's get as many young people as possible ready to vote on May 23.

Perhaps the most notable effort comes for Best For Britain, which launched a web application last week called Get Voting. This site does several things required to increase voter turnout. Firstly, it gets voters registered without the need to print anything, through a simple and modern interface.

Voter registration is a pressing concern, especially for those parties that back remain. There’s an estimated 7.8 million people in the UK who are eligible to vote in the EU election, but are not listed on the electoral register. A significant chunk of these are likely European citizens that are habitually resident in the UK.

EU immigrants typically aren’t allowed to vote in national or local elections (with the exclusion of citizens of Cyprus, Malta, and Ireland), but on the basis of holding European Union citizenship, are allowed to vote for their MEPs.

Simultaneously, GetVoting aims to increase turnout by making it easy to request a postal vote. By removing the polling station from the equation, Best For Britain hopes that more people will be empowered to exercise their voice later this month.

Finally, it sends a notification before the polls open, reminding people to vote.

Of course, Get Voting isn’t the sole effort in this space. Other sites have sprung up, with one in particular attracting controversy. Registertovote.eu, which was promoted by certain MPs, promised to get EU citizens on the electoral register, but was ultimately shut down after it transpired the site was filing incomplete paperwork to the Electoral Register, rendering some registrations invalid.

Eurosceptic parties are proliferating across Europe. It’s not just Britain, where UKIP and the Brexit Party (as well as, it seems, the Conservative Party, which is strange given it was Tory grandee Thatcher who signed the Maastricht treaty) loudly espouse opposition to the European Union. In Germany, there’s the AFD. France has the Front Nationale. Italy has the Lega Nord. Sweden has the Swedish Democrats. Finland has the Finns Party.

I’m not accusing any of these parties of being in bed with a foreign actor. That being said, if someone wanted to fundamentally disrupt the operation of the EU, a good start would be to elevate these parties into a position of power. So, for example, if Russia wanted to prevent the passage of an EU-wide Magnitsky Act, it could focus on promoting the most vehemently disruptive elements possible.

One effort from Mozilla is the “EU Elections Toolkit,” which is designed to inform about the digital dark patterns that can influence them in the voting booth. It explains how tracking works on social networks. It also offers an explainer of opaque election advertising, which was used so effectively in the 2016 campaign by Vote Leave, bolstered by the technology of Cambridge Analytics.

It also offers a non-partisan explanation of the EU and its institutions, as well as browser extensions designed to help people fact-check news sources.

Beyond Brexit, there’s still a huge importance attached to voting in the EU’s elections. From trade policy to copyright reform, the EU influences so much of our day-to-day lives. To ensure that it works in your best interests, you’ve got to vote.

The elections will take place later this month between May 23 and May 26. The exact date depends on your country.

It is one of the world’s biggest democratic exercises, and given the power and influence of the EU, arguably one of the most important. No matter what side of the fence you sit on, Europhile or Eurosceptic, you really ought to vote.

Read next: Even I, a fool, could photoshop the coffee cup out of the latest GoT episode